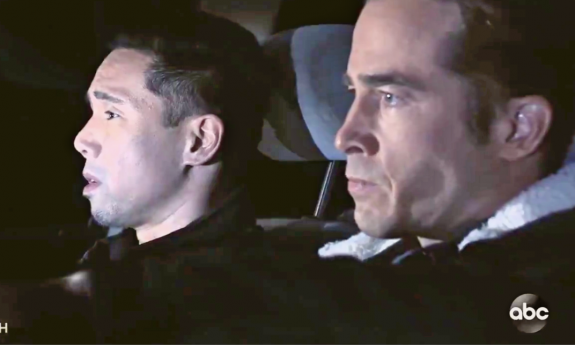 General Hospital (GH) spoilers for Monday, December 2, tease that the excitement’s about to rev up in Port Charles. We should mention that GH will be preempted on Friday, November 29. General Hospital fans won’t miss anything since the action will resume right where they left off. GH will deliver a brand-new episode on Monday, so let’s dive in and see what’s in store.

First, Lulu Spencer (Emme Rylan) will become enraged over Brook Lynn Ashton’s (Amanda Setton) comments. She’ll yell that Dante Falconeri (Dominic Zamprogna) abandoned her and seemingly shut down Brook Lynn’s attempts to turn this around on her. Lulu isn’t to blame for Dante’s issues, so she’ll make sure Brook Lynn gets her message loud and clear.

As for Monica Quartermaine (Leslie Charleson), she’ll have her fair share of Thanksgiving drama. Monica will ask if Olivia Quartermaine (Lisa LoCicero) has really lost it. This may involve some problems regarding “Drew Cain” aka Franco Baldwin (Roger Howarth) and his presence at the gathering. If Olivia is rude to “Drew” somehow, perhaps Monica will unleash her wrath.

Other General Hospital spoilers say Sonny Corinthos (Maurice Benard) will reflect on his dad’s difficult holiday. Sonny hoped Mike Corbin (Max Gail) would be able to enjoy himself at the Corinthos family gathering, but that plan didn’t work out. On Monday, Sonny will tell Carly he doesn’t want to be “that guy.” He might mean the kind of guy who pretends his father isn’t fading fast.

Sonny is starting to accept that Mike’s passed a difficult point in his Alzheimer’s progression. Mike isn’t going to be the same anymore. He’ll get worse in the coming weeks, so Sonny has to wrap his head around that and prepare for the inevitable.

Meanwhile, Maxie Jones (Kirsten Storms) will think she knows why Peter August’s (Wes Ramsey) earlier conversation made him uncomfortable. Peter seemed uneasy after Andre Maddox (Anthony Montgomery) told him “Drew” was going through with the memory reversal procedure after all. It appears Maxie will suspect she knows the reason, but we all know Maxie’s theory will miss the mark!

At GH, Julian Jerome (William deVry) will continue his discussion with Neil Byrne (Joe Flanigan). The puzzle pieces are coming together, so they’ll know Kendra Lennon (Michelle Argyris) is indeed the one who poisoned Alexis Davis (Nancy Lee Grahn). They’ll also know how, but they won’t know why.

Of course, Alexis just figured that out and found herself on the receiving end of Kendra’s attack. Kendra smacked Alexis in the head with a rock, but Alexis will regain consciousness on Monday. General Hospital spoilers say Kendra will declare that Kiefer Bauer (Christian Alexander) didn’t deserve to die. She’ll be determined to avenge her brother’s death and won’t listen to Alexis’ side of the story.

Next, Brad Cooper (Parry Shen) will face rising pressure. Lucas Jones (Ryan Carnes) is sick and tired of all Brad’s secret. He can tell Brad’s keeping another big one, so he’ll shout that Brad should just tell him what it is. Lucas won’t understand why Brad’s putting up such a fight, but GH viewers know it’s because the truth could break them forever. Brad certainly doesn’t want to divulge the baby swap details.

General Hospital Spoilers: Lucas Jones Gets Behind The Wheel With Brad Cooper As A Passenger

Lucas will get behind the wheel later, and Brad will be in the passenger seat. It seems likely that Lucas will be driving Brad’s vehicle, which Julian tampered with. This storyline could end up ramming right into Alexis’ hot plot. Will Kendra dump Alexis and leave her to get hit by Brad’s runaway car?