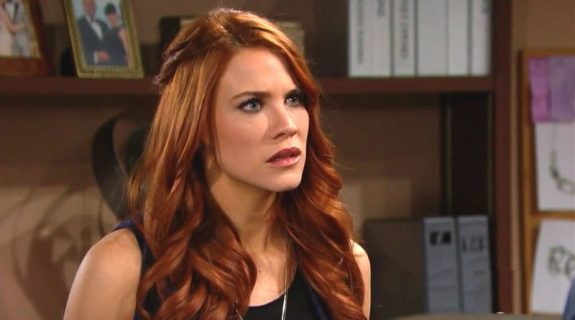 The Bold and the Beautiful spoilers for Monday, December 2, tease that things are really heating up on the CBS soap. But before we get to that, we have a programming note, as B&B will be nationally preempted for football on Friday, November 29th. So, the next new episode that viewers will see is on Monday, December 2nd, and we’ve got the scoop about what will happen right here.

On Monday, Sally Spectra (Courtney Hope) will find herself making a huge blunder. As B&B viewers know, she and Wyatt Spencer (Darin Brooks) got engaged recently, yet Sally does’t yet have a ring and they haven’t set a wedding date. And not too long ago, Wyatt reconnected with Florence “Flo” Fulton (Katrina Bowden) after he learned that she underwent life-saving kidney surgery for Katie Logan (Heather Tom).

At the time, Wyatt seemed to be re-thinking his engagement to Sally. After all, it was tough for him to just turn off the feelings he had for Flo, despite what he found out that she did with keeping Beth Spencer’s (River Davidson and Madeline Valdez) away from Hope Logan (Annika Noelle) and Liam Spencer (Scott Clifton) for so long.

Bold And The Beautiful Spoilers: Wyatt Spencer Will Rethink engagement with Sally Spectra

Well, on Monday’s B&B episode, Wyatt will get some more reason to re-think his engagement with Sally. The two will be discussing wedding plans and their current lack of a wedding date. Sally will remark that she hasn’t been pushing to plan the wedding, as that’s not a attractive look for a woman. But Wyatt will then sweetly remark that she could never be unattractive.

The Bold and the Beautiful Spoilers: Ridge And Brooke Over – Thomas Instrumental In Break Up

The two will then kiss, and Sally will then say, “Well, then, are we dig this or not, Liam?” And that will be a major moment for the couple. Wyatt will likely be stunned to hear his brother’s name coming out of Sally’s mouth in such an intimate moment. We’ll see how he reacts to the situation, but it doesn’t look like it will be a good scene.

Meanwhile, on Monday’s new episode of B&B, Ridge Forrester (Thorsten Kaye) and Shauna Fulton (Denise Richards) will wrap up their kiss at the Forrester mansion. It looks like they’ll end up talking some more. As B&B viewers know, Ridge opened up to Shauna about how he felt about his marriage ending. On the one hand, Ridge knows his marriage is over, but on the other hand, Brooke Forrester (Katherine Kelly Lang) will always be the love of his life.

This was difficult for Shauna to take, and she nearly left. But then Ridge moved in for a kiss. B&B spoilers for Monday say that Shauna will take Ridge by surprise with her understanding and another kiss. And it looks like Quinn Forrester (Rena Sofer) will come upon them and spy their kiss. Ongoing B&B spoilers say that she’ll later quiz Shauna about the kiss and want all the details from her friend.

The Bold and the Beautiful Spoilers: Steffy Calls Out Hope on Her True Colors – She’s a ‘Typical Logan’ https://t.co/TYkU3uan9M pic.twitter.com/6Qow1ct3oI

Finally, on Monday’s new episode of B&B, Liam will arrive for his first day back at Spencer Publications. It looks like Bill Spencer (Don Diamont) will have something special planned for Liam, and he, Wyatt, Justin Barber (Aaron D. Spears), and Billy’s city hall connection Emmy (Sheryl Underwood) will welcome Liam back to his old job.

In fact, it looks like things will even get a bit touching, as B&B spoilers indicate that Bill will show his softer side during the little gathering. He might have some words of encouragement for Liam, and he’ll probably want to make sure that Liam knows how happy he is to have him back at his side. This will be a big step for Bill, who will probably be thrilled to have both of his sons back at Spencer.

As B&B viewers will remember, it wasn’t that long ago that Bill was estranged from both of his sons over his lies and manipulations about Liam and Steffy Forrester’s (Jacqueline MacInnes Wood) relationship. The Spencer men will have really come a long way, and they’ll have good reason to celebrate.