The Young and the Restless Spoilers: Friday, November 29 – The Newmans Celebrate – Sharon Feeds The Homeless – Adam & Phyllis Dine Together 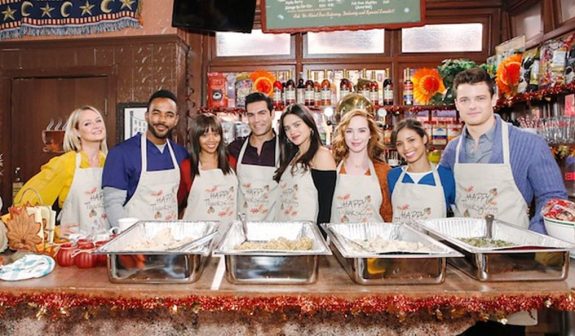 The Young and the Restless spoilers for Friday, November 29, tease that Nick Newman (Joshua Morrow) will try to convince Summer Newman (Hunter King) to attend the Newman Thanksgiving dinner. She’ll say that she is planning a chill holiday with Theo Vanderway (Tyler Johnson), but that she’ll stop by the ranch.

Summer will wonder whether Chelsea Lawson (Melissa Claire Egan) will be there but Nick won’t know. He’ll remark that Adam Newman (Mark Grossman) is using the situation with Connor Newman (Judah Mackey) to his advantage.

Next on Y&R, at Adam’s penthouse, Chelsea will want to take Connor to the Newman Thanksgiving gathering, and Adam won’t like it, but Chelsea will insist. Later on, Phyllis Summers (Michelle Stafford) will stop by Adam’s place with Chinese food. They’ll banter back and forth in their usual way, and throughout the course of their conversation, Adam will bring up her Grand Phoenix security software. Phyllis will admit that Simon Black (Jeffrey Vincent Parise) altered her plans.

The two will eat and drink together, but Adam will remain skeptical about her motives. She’ll insist that she is simply on a mission of mercy by being there, and they’ll both say that they’re out of the scheming game. After dinner, they will toast to deserving to get what they want.

Young And The Restless Spoilers: Sharon Newman & Others Feed The Homeless

Amanda Sinclair (Mishael Morgan) will arrive as well and some friction will ensue between her and Elena, who will tell Lola Abbott (Sasha Calle) that Amanda is a snake. Kyle Abbott (Michael Mealor) will be on hand as well and will get a little pep talk from Mariah about counting his blessings. And Elena will end up leaving in a huff when she learns from Nate that Amanda is thinking of staying in Genoa City.

After everyone leaves for the day, Sharon and Rey will talk about how great the day was, and Rey will be impressed with Sharon and give her credit for the true spirit of generosity in the room. They’ll end the day with a dance.

The Young and the Restless Spoilers: Victor Puts Heat On Billy For Being Unemployed https://t.co/irHcDJq25A pic.twitter.com/Oy12RguAAa

Next on Y&R, the Newmans will enjoy their holiday at the ranch. While the kids are outside, the adults will have various conversations inside. Victor Newman (Eric Braeden) will needle Billy Abbott (Jason Thompson) about not having a job, and everyone will notice the serious tension between Chelsea and Nick throughout the day.

Later, Summer will arrive for dessert and she’ll reveal that she has mostly forgiven Victor for not including her in his death ruse several weeks ago. They’ll all discuss what they’re thankful for – Nikki Newman (Melody Thomas Scott) will be grateful for Victor’s health, and others will chime in that they’re grateful for family. Victor will go on about family, and the various couples around the room will kiss – but not Chelsea and Nick.

Finally, on Friday’s episode of Y&R, Chelsea will return to Adam’s penthouse with Connor, who will say that he had fun. Adam will think that Chelsea did the right thing by taking him to the Newman gathering. Chelsea will soon learn that Phyllis was there with him earlier for Chinese food. She’ll end up staying at Adam’s for the night, while at home Nick will learn that she’s not coming home.