Days of Our Lives Spoilers: Abigail Brings Jennifer Back to Scene of Crime – Will It Trigger Traumatic Memories? 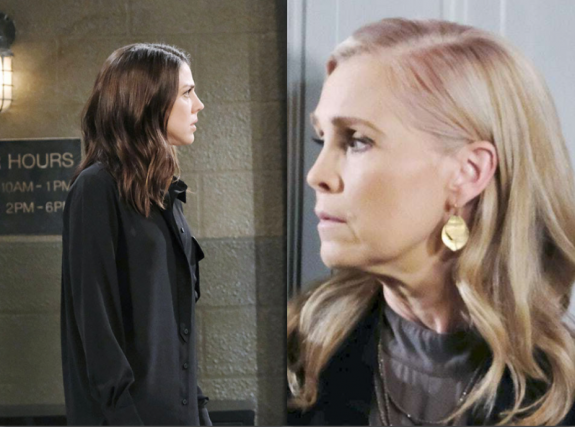 Days of Our Lives spoilers reveal Abigail DiMera (Kate Mansi) brings her mom to the scene of the tragic fall that put her in a coma for an entire year. She hopes that it will trigger Jennifer Horton’s (Melissa Reeves) memory of what happened that night. Could it be the key to proving Eve Donovan (Kassie DePaiva) is innocent and Hope Brady aka Princess Gina (Kristian Alfonso) was the pusher that night?

DOOL spoilers confirm that Jennifer was pushed off that balcony by Princess Gina in order to protect a secret. The Salem Spectator reporter had just discovered Dr. Rolf’s (William Utay) plan to transform Hope into Princess Gina. What she didn’t realize, however, is that it had already been done.

Somehow, Princess Gina was able to cover up her tracks that night. One of the reasons it was so easy to point the finger at Eve was due to her behavior earlier that night. She crashed Jennifer and Jack Deveraux’s (Matthew Ashford) wedding. She verbalized her wish that Jennifer would die to Roman Brady (Josh Taylor). Plus, everything she has done over the years to hurt Jennifer and of course, her recent divorce from Jack.

Days of Our Lives spoilers reveal that Eve actually made some headway when asking Abigail to investigate on her behalf. The young woman had no interest in helping Eve. She knows everything the woman has done to hurt Abigail’s family, especially her mother. She was also convinced like everyone else that Eve was guilty.

Days of Our Lives #DOOL Spoilers: How will Steve's return as Stefano Impact Justin and Kayla? @celebratesoaps https://t.co/3qyzMBjRGi

Even though everyone believes Eve is guilty, Abigail is determined to find out the truth. She swore her innocence on Paige Larson’s (formerly True O’Brien) grave. Eve also said something that grabbed Abigail’s attention. The guilty person is still out there free as a bird and could try killing Jennifer again. These two factors are what makes Abigail believe that for once, Eve is telling the truth.

However, what will happen when Jennifer remembers that it wasn’t Eve that pushed her, but her own cousin and best friend Hope?

Days Of Our Lives (DOOL) Spoilers: Justin Encourages Bonnie Lockhart Not To Give Up…

Days Of Our Lives (DOOL) Spoilers: A Big Finish Is Coming at Christmas For The…