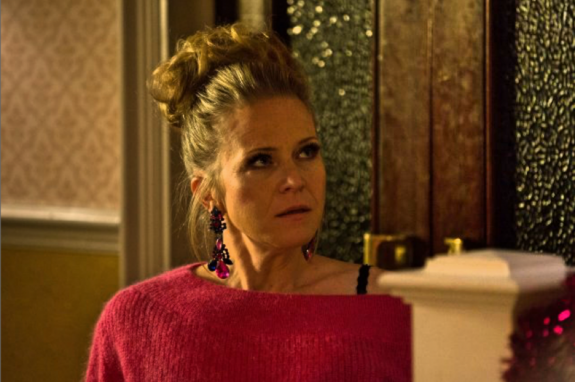 Eastenders spoilers reveal Linda Carter’s (Kellie Bright) drinking is going to get worse before it gets better. Her husband, Mick Carter (Danny Dyer) fears for her health now that he knows the truth. Just how far will Linda go before she hits rock bottom?

It was teased months ago that Linda would have an alcoholism storyline. As with most plots on the soap, it focuses on real-life struggles with consequences. It is relatable and with millions of people worldwide having an alcohol dependency problem, it is a storyline that needs more attention.

The plot has begun and as fans know from a recent episode, Linda rammed into another car while dropping her son off at school. Still drunk from the night before, she hoped nobody would know it was her and drove off. However, the police were called and later, she had to deal with the consequences.

Even after being banned from driving, incurring fines and being forced to take a course, Linda couldn’t stay away from the booze. She did her best to delay the drinking until the end of the night, but then she guzzled it down like nobody’s business, making up for those hours of being sober.

It is hinted that Linda’s drinking will continue to get worse before it gets better.

Eastenders spoilers reveal that Linda’s husband is becoming increasingly concerned. He worries that the drinking will have an adverse effect on Linda’s health and he is right. Some very bad things could happen before Linda realizes she has a problem and comes up with the strength to battle her addiction.

It appears that this storyline is going to have Linda hitting rock bottom. Hopefully, something tragic doesn’t happen before then.

What do you think of Linda Carter’s storyline? Will her drinking get worse before it gets better? Could something devastating happen before she gets the help she so desperately needs? Keep watching the British soap to find out how this storyline develops.