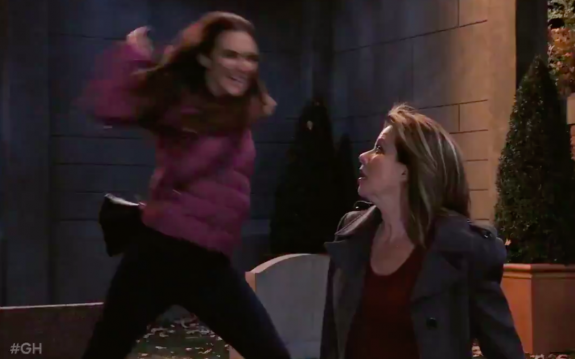 General Hospital (GH) spoilers update for Monday, December 2, teases that Sonny Corinthos (Maurice Benard) will lean on Carly Corinthos (Laura Wright). His plan to have a nice Thanksgiving with Mike Corbin (Max Gail) was a disaster, so he’s no longer in denial about how serious his dad’s condition is.

Over with Maxie Jones (Kirsten Storms), she’ll talk to Peter August (Wes Ramsey) about an earlier conversation that made him uncomfortable. Maxie may be referring to that unsettling chat with Andre Maddox (Anthony Montgomery), which brought the news that “Drew Cain” aka Franco Baldwin (Roger Howarth) changed his mind about the memory reversal procedure.

Maxie will think she knows the reason for Peter’s discomfort. She may think Peter was reminded of his dark history and is once again battling guilt because of it. Maxie might assure Peter that he’s a good man and she loves him for who he is right now.

Unfortunately, Maxie doesn’t know the extent of Peter’s involvement in the memory-mapping project. She’s not aware of his partnership with Helena Cassadine (Constance Towers) and has no clue he’s taken deadly action to cover it all up. General Hospital spoilers say Peter will downplay how rattled he is and hope he can keep the truth under wraps.

Speaking of keeping the truth under wraps, Brad Cooper (Parry Shen) will continue to do so. Lucas Jones (Ryan Carnes) is beyond frustrated with his husband, so he’ll end up shouting at Brad to just tell him what it is. Of course, “it” is the big secret Brad’s hiding. Lucas urged Brad to just come clean so they could figure this out, but Brad knows his secret’s bad enough to tear them apart forever.

Lucas and Brad will get in a car together later – most likely Brad’s car since that’s the one Julian Jerome (William deVry) tampered with! Brad will face more pressure to confess, but they’ve got bigger problems. Lucas may not be able to apply the brakes when he comes across another Port Charles resident in trouble.

Kendra Lennon (Michelle Argyris) whacked Alexis Davis (Nancy Lee Grahn) in the head with a rock, which left Alexis unconscious. Once Alexis awakens, she’ll get a full explanation for Kendra’s vengeful scheme. Kendra will rant about how Kiefer Bauer (Christian Alexander) didn’t deserve to die. Alexis, however, will indeed deserve a grim fate according to Kendra. She’ll be basing this off Shiloh Archer’s (Coby Ryan McLaughlin) info, which came from Kristina Corinthos-Davis’ (Lexi Ainsworth) bogus confession.

GH Spoilers: Alexis Davis Will Be At The Receiving End Of Kendra Lennon’s Revenge

Despite Alexis’ attempts to protest, Kendra will be determined to get revenge. She’ll wind up in a car wit Alexis, but what will her next step be? Will Kendra toss Alexis out and want her to be roadkill like Kiefer? Will Lucas smash into their car before Kendra has the chance? It certainly looks like we’re building to some type of car accident, so expect some shocking scenes.

At GH, Julian Jerome (William deVry) will keep pondering Kendra along with Neil Byrne (Joe Flanigan). It seems they’ll be on the same page about Kendra’s guilt, but they’ll be confused about why she’d target Alexis. Neil and Julian might realize Kendra must have some secret connection to Alexis. Whether they figure out the Kiefer link now or later, the big picture is indeed coming together.

Other General Hospital spoilers say major drama will go down at the Quartermaine mansion. Monica Quartermaine (Leslie Charleson) will wonder if Olivia Quartermaine (Lisa LoCicero) has really lost it. She’ll be outraged over something Olivia does at the gathering, so this might involve “Drew Cain” aka Franco Baldwin (Roger Howarth) and Olivia making him feel less than welcome.

Monica wants a little more time to bond with “Drew” before his memory procedure, so she won’t approve if Olivia or anyone else gets in the way of that. As for Lulu Spencer (Emme Rylan), she’ll blast Brook Lynn Ashton (Amanda Setton) over some comments about Dante Falconeri (Dominic Zamprogna). It appears Brook Lynn will act like Lulu’s at fault for their divorce, so Lulu will be furious. She’ll insist Dante abandoned her and try to put Brook Lynn in her place.