The Bold and the Beautiful Spoilers: Monday, December 2 Revised – Shauna Declares Love For Ridge – Sally Calls Out Liam’s Name When With Wyatt – Bill Gets Sentimental 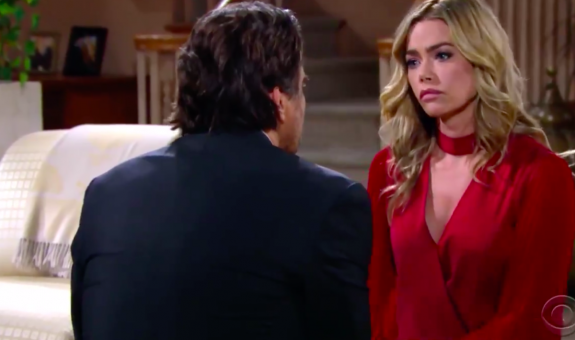 The Bold and the Beautiful spoilers for Monday, December 2, tease that Ridge Forrester (Thorsten Kaye) and Shauna Fulton (Denise Richards) will continue their lip lock at the Forrester mansion, and Shauna will have a big revelation for Ridge. As B&B viewers know, the two have been talking, and while Ridge made it clear that Brooke Forrester (Katherine Kelly Lang) will always be the love of his life, he was kind to Shauna and called her a beautiful, extraordinary woman.

Well, it looks like Shauna will stun Ridge when she admits to him that she’s fallen in love with him. B&B viewers know that Shauna has been infatuated with Ridge since she first came to Los Angeles, but it seems that her feelings will have developed into something more. Of course, Shauna knows that Ridge is still getting over Brooke, so she probably won’t pressure him into saying the words back to her – she’ll just want to let Ridge know how she feels.

And it looks like Ridge and Shauna might be headed for another kiss after their conversation. In an upcoming episode, Quinn Forrester (Rena Sofer) will want to hear all sorts of details from Shauna after she spies them kissing, so it seems that Quinn may burst in as the two are finishing up their conversation and smooching.

The Bold and the Beautiful Spoilers: Brooke Gives Ridge Another Ultimatum – Tells Him What He Has to do to Win Her Back

Meanwhile, on Monday’s episode of B&B, Sally Spectra (Courtney Hope) will make a huge slip of the tongue. As B&B viewers know, she and Wyatt Spencer (Darin Brooks) recently got engaged, but Sally doesn’t yet have a ring and the two haven’t talked about a wedding date. And then after Florence “Flo” Fulton (Katrina Bowden) donated her kidney to save Katie Logan (Heather Tom), Wyatt seemed to start having second thoughts about whether he really wanted to marry Sally.

Wyatt and Sally will then kiss, and Sally will say, “Well, then, are we doing this or not, Liam?” In other words, she will have called Wyatt by Liam Spencer’s (Scott Clifton) name during an intimate moment. Sally will probably be shocked, and Wyatt even more shocked. B&B viewers will remember that Sally and Liam had a brief flirtation when she first arrived on the scene a couple years ago. They even shared a kiss at one point.

At any rate, the whole thing is going to give Wyatt pause, and it seems that he and Sally will have a lot to talk about. Of course, it will probably end up being a simple mistake on Sally’s part, but it will probably be pretty jarring for Wyatt to hear. And given his own feelings for Flo combined with this slip by Sally, he might just want to rethink the engagement.

B&B Spoilers: Bill Spencer Welcomes His Son Back To The Fold

Finally, on Monday’s new episode of B&B, Bill Spencer (Don Diamont) will have something special planned for Liam as he comes back to Spencer Publications for his first day. As B&B viewers know, it’s been a long time since Liam worked for his father at the publishing house. Bill and Liam underwent a period of estrangement for over a year due to Bill’s affair with Steffy Forrester (Jacqueline MacInnes Wood) and his manipulation to keep the pair apart.

But all of that is behind them now, and Bill will have something special planned. He’ll welcome Liam back with a little gathering including himself, Wyatt, Justin Barber (Aaron D. Spears), and Billy’s city hall connection Emmy (Sheryl Underwood). They’ll all welcome Liam back to the fold with open arms.

It even looks like thing will get sentimental, as B&B spoilers say that Bill will show his softer side during the gathering. He may have some words of encouragement for his son, and he’ll want to make sure both Liam and Wyatt know how meaningful it is to have both his sons back at the family business. B&B viewers should anticipate some touching scenes.