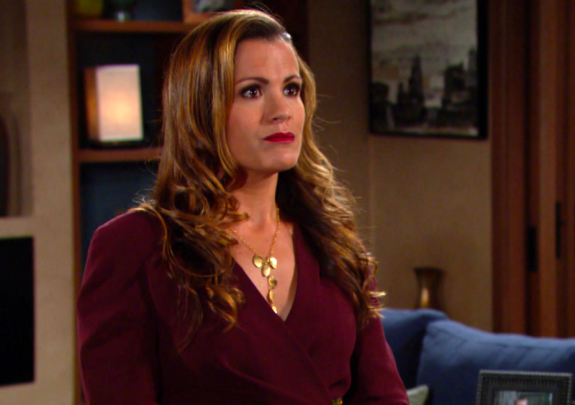 The Young and the Restless spoilers for Monday, December 2, tease that Victoria Newman (Amelia Heinle) will be late to meet with Billy Abbott (Jason Thompson) at Society. They’ll discuss what Billy’s going to with his life now that he’s unemployed. They’ll do some free association as an exercise to see what interests Billy, Construction will come up, and Victoria will suggest that he work for Nick Newman (Joshua Morrow) at New Hope, but Billy will nix the idea and then leave as Victoria hops on a business call.

Meanwhile, at Nick’s place, he and Chelsea Lawson (Melissa Claire Egan) will chat with Nick about the next steps for Connor Newman (Judah Mackey). Chelsea will tell Nick that Adam Newman (Mark Grossman) wants her to move into the penthouse, and Nick will be horrified to learn that Chelsea is actually considering it. Chelsea will explain how much Connor needs him.

Nick won’t blame Connor, but he’ll blame Adam for encouraging Connor to think that it’s a possibility that she and Adam will get back together. Nick will give her the cold shoulder and think that Adam is playing her. Nick will put on his coat to “get some air,” and Chelsea will hope he’s not going to confront Adam.

Next on Y&R, Chance Chancellor (Donny Boaz) will chat via phone with Devon Hamilton (Bryton James) and tell him that Colin Atkinson (Tristan Rogers) is on the lam, and that he can’t do anything about it due to his personal involvement. Devon will be mortified and angry, and he’ll tell Elena Dawson (Bryni Sarpy) that someone’s going to answer for this.

Elena will caution Devon against getting revenge, which will lead to an argument between them. Devon will say that she’s making him feel guilty for having a human response to a situation, and that she didn’t make Nate Hastings (Sean Dominic) feel guilty when he helped Victor Newman (Eric Braeden) fake his own death.

That will irritate Elena, who will say that Devon is better than all the people trying to take him down. Devon will apologize. Elena will then say that she’s not going anywhere, and that if he tries to push her away, then he loses. They’ll decide to get some fresh air.

Next on Y&R, at the Grand Phoenix, Amanda Sinclair (Mishael Morgan) will be looking at a tracking system on her phone that’s watching someone’s whereabouts, when Nate approaches. Amanda will kid him about being a little late for their meeting, and he’ll pay her final bill for her legal services.

Nate will wonder what’s next for her, and she’ll say that there’s nothing left for her in Madison and that she needs to start over. Nate will note that she shut down her practice in Madison without having something started here, and Amanda will skirt the issue. Elena’s name will come up during the conversation, and up will walk Devon and Elena.

Devon will confront Nate about hanging out in public with Amanda, and Amanda will get peeved and walk off, saying she’s had enough. Nate will keep arguing with Devon and Elena. While Devon takes a call, Elena will blast Nate for defending Amanda. She’ll really lash out and they’ll rehash the same old arguments about Amanda before Elena angrily walks out with Devon.

Young And The Restless Spoilers: Abby Newman Sets A Trap

Next on Y&R, Chance will speak with Abby Newman (Melissa Ordway) at the Grand Phoenix and they’ll flirt a little. Chance will want to help her solve the theft case at the hotel. Abby will do a social media post on her laptop to lure the thief to the hotel, and she and Chance will remark that they’ve got fake jewels in one of the room safes. Now they just have to wait.

They’ll continue to flirt, and Abby will ask about his most exciting case, and he’ll recite the plot from some movie, which she’ll call him on. Chance will reveal that his work is quite unglamorous.

Meanwhile, at Society, Nick will catch up with Victoria and share what’s going on with Chelsea and Adam. Victoria will think that Chelsea’s the problem, but Nick will say that Adam’s the issue. They’ll rehash how Chelsea feels guilty about what happened with Simon Black (Jeffrey Vincent Parise) and Nick will explain that Chelsea’s got a lot on her plate.

Next on Y&R, Billy will show up at a bar alone and sit drinking by himself, when Amanda walks in and sits at a nearby table. Billy will stare, and Amanda will guess that he must have known Hilary Hamilton (Mishael Morgan). They’ll make introductions, then some guy at a nearby table will notice Amanda and bother her. Billy will intervene and the guy will leave. Billy will leave as well after turning down Amanda’s offer to buy him a drink. Billy will then ignore a call from Victoria and keep drinking.

The Young and the Restless Spoilers: Thanksgiving Matters More This Year – Shey And Chick Spend Time Together https://t.co/EepDkWn15h pic.twitter.com/mNohUifemN

Young And The Restless Spoilers: Chelsea Lawson Makes A Decision

Finally, on Monday’s new episode of Y&R, Nick will arrive back home, where Chelsea is packing. Chelsea will say that “he needs me,” and Nick will think that it’s unfair that she’s leaving him and Christian Newman (Alex Wilson). He’ll say that he loves her too much to let her walk out the door without letting her know how he feels about this.

Chelsea will say this decision is not about her and Adam, but Nick will say that he knows what Adam is capable of. They’ll at least agree that Connor should be put first, and Nick will vow to support Chelsea. They’ll embrace, but Nick won’t be happy about it. Chelsea will take her bag and leave.