General Hospital Spoilers: Sonny Hopes For A Miracle- Can He Find A Cure For His Father? 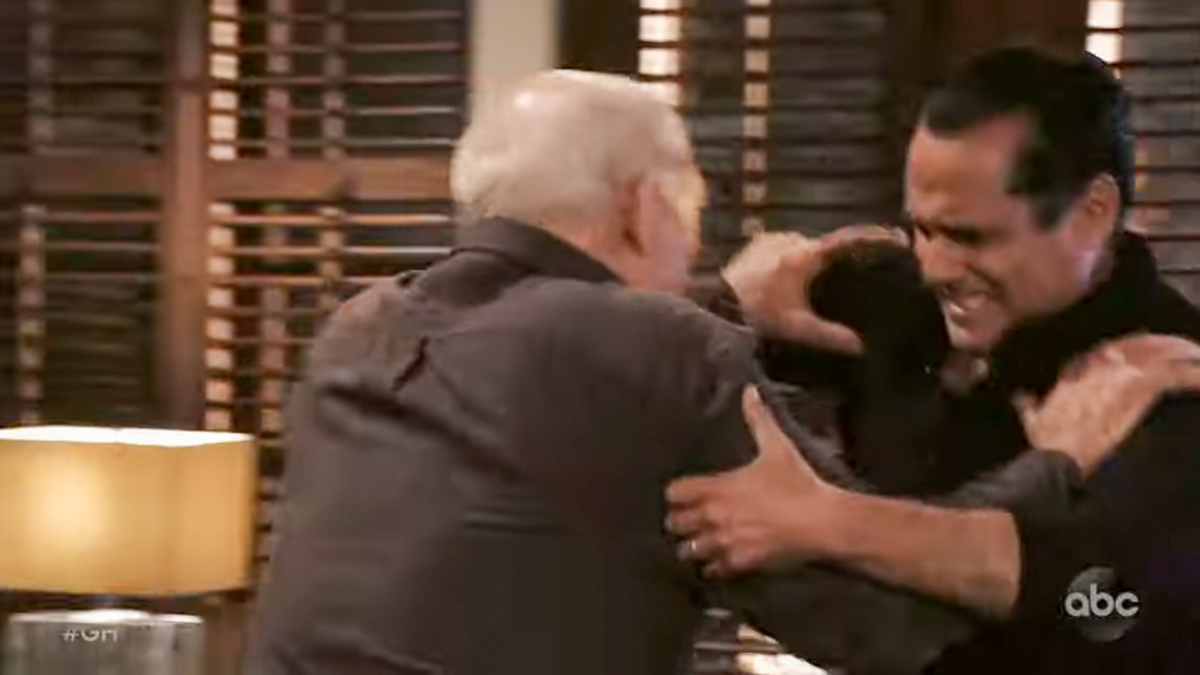 As General Hospital viewers will recall, Mike Corbin (Max Gail) is deteriorating rapidly. His Alzheimers disease has really ramped up, and he became so confused in recent episodes that he had taken his shoes off at Turning Woods Memory Care facility and was trying to figure out where jigsaw puzzle pieces went, looking like he was trying to put them in his shoes.

Carly Corinthos (Laura Wright) became concerned about him picking up baby Donna Corinthos (Ella and Emma Hulen) in a recent episode, worrying he would become erratic, even though he obviously knew she was a baby, but he didn’t remember her name! He didn’t look like he would cause her any harm, however.

However, in a recent General Hospital promo, Mike becomes combative and gets in a physical fight with his son, Sonny Corinthos (Maurice Benard)! In the scene, Mike and Sonny are in the Corinthos living room, and Mike starts pushing at Sonny, and they knock over a table in the center of the room, as Mike shouts at Sonny to get off him!

Mike obviously is having a flashback to a time he was in a fight with someone and had to defend himself, and he thinks Sonny is that person and he is in that place! Other General Hospital spoilers tease that Carly will call in a specialist, and this could be about Mike’s deteriorating condition. However, there isn’t much in modern medicine that can help with Alzheimer’s disease, and this is what the specialist will advise.

General Hospital Spoilers: Willow Is Anxious To Know The Truth – Does She Have A Surprise In Store? https://t.co/7keq8Uvos7 pic.twitter.com/OTZMrPzFZe

General Hospital Spoilers – Sonny Corinthos Will Hope For A Miracle

Obviously, Sonny will hope for a miracle and perhaps take Mike on a trip back to where they lived before, hoping to help him get his mind straight on various phases of his past and of his life, but it may not do any good. Mike’s cognitive decline will only get worse, and the day is fast approaching when Mike won’t even know who he is, let alone anyone else. Even his past memories will fade away, and he will be in more or less a vegetative state and his brain will degenerate to a point where his bodily functions won’t even work and at that point, death is near.

Alzheimer’s disease not only affects the mind, it affects the body, because it is a disease of the brain physically and not only a disease of the mind. The brain is the control center of the whole body, not just of mental reasoning, memories and knowledge. Mike may become more combative as time goes on, and that could be a problem as well. That will be the result of trying to hang onto the last sense of self that he has, and eventually the brain won’t work even to run the body, and his organs will fail, and he will die.