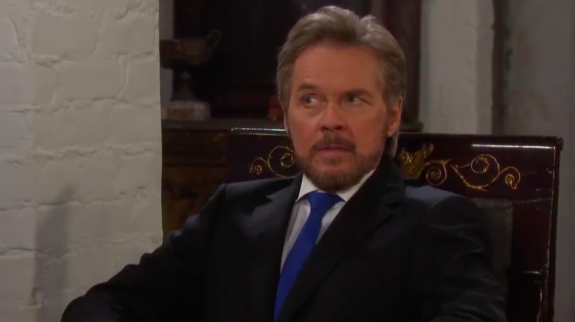 Days Of Our Lives Theory: Baby Mickey Has Same Illness As Tate, Making Him Brady And Kristen’s Daughter

Interrelated to the Stefano story, Hope Brady (Kristian Alfonso) is still Princess Gina, and she offers resistance to Abigail DiMera (Kate Mansi) when she wants to look into Jennifer Deveraux’s (Melissa Reeves) case. Abigail will tell Eve Donovan (Kassie DePaiva) that she doesn’t think she pushed her mother over the balcony at The Bistro, and Jennifer will recall the moments from before her fall. Detective Rafe Hernandez (Galen Gering) will begin finding Hope’s behavior suspicious.

Ben tries to stop Clyde from hurting Will, finding Clyde with a knife and the two get into a struggle. Meanwhile, Ciara is finally successful in breaking into Xander’s metal briefcase. Ciara will make a move towards Xander.

The fallout from the revelation of Eric Brady (Greg Vaughan) being baby Mickey Horton’s (the May twins) birth father continues, as Nicole Walker (Arianne Zucker) and Brady Black (Eric Martsolf) comfornt one another about their losses. Nicole will beg Eric to forgive her, and Eric will introduce Mickey to John and Marlena.

Eric will give Sarah Horton (Linsey Godfrey) an ultimatum regarding shared custody of the baby, and Marlena will discover Mickey has a fever and tell Eric.

JJ Deveraux Goes On The Hunt For Kristen DiMera

JJ Deveraux (Casey Moss) who blames Kristen DiMera (Stacy Haiduk) for the death of his girlfriend, Haley Chen (Thia Megia) will go on the hunt for Kristen. He continues to insist Kristen murdered Haley, even though Jennifer tries to get through to him.

Days of Our Lives Spoilers: Lani Reunites With Eli In Italy – Will She Tell Him The Truth About Gabi? https://t.co/E0hI5DVlhj pic.twitter.com/HW4ahfBQus

JJ is desperate enough for revenge that he trails Eli Grant (Lamon Archey) to Rome, hoping that he will lead him to Kristen, and he does indeed find Kristen and confronts her – with a gun!

Chad DiMera (Billy Flynn) and Gabi DiMera (Camila Banus) will go head to head for control of DiMera Enterprises, and Gabi sends Eli to Rome to thwart Chad! Kate Roberts, (Lauren Koslow) who had also been in the running for the CEO position prior to the one year jump, winds up taking a waitress job at Brady’s Pub, but it will likely turn out that Stefano will reveal himself and put an end to the squabbling over DiMera soon by stepping back into position himself!