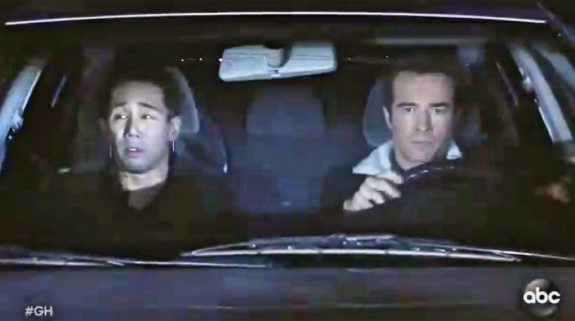 Dr. Hamilton Finn (Michael Easton) and Anna Devane (Finola Hughes) will have to have a heart to heart talk about the possibility of raising Violet Barnes (Jophielle Love) together in the absence of her mother, Hayden Barnes (Rebecca Budig)!

Finn will worry what to tell Violet about what happened to her mommy, and Nina Reeves (Cynthia Watros) will be surprised that Aurora/Crimson is missing an accountant! Jasper “Jax” Jacks will confront Valentin Cassadine (James Patrick Stuart) by the middle of the week, possibly over Hayden’s disappearance.

Dr. Lucas Jones (Ryan Carnes) and Brad Cooper (Parry Shen) are still arguing, and Lucas pleads with Brad to just tell him the truth about what he’s hiding! The weekly General Hospital promo, “Big December” shows the two arguing in the car and Lucas takes his eyes off the road; unbeknownst to either man, Julian Jerome (William DeVry) had tampered with the car, thinking only Brad would be in it.

Julian will make a devastating discovery and it may be in regards to Lucas being in the car. Carly Corinthos’ (Laura Wright) plans will be cut short, Bobbie Spencer (Jacklyn Zeman) will have terrible news to share, and Michael Corinthos (Chad Duell) will offer to help, and later he will press for more info.

Julian may make two devastating discoveries this week on GH, since he is also involved in solving his ex-wife Alexis Davis’ (Nancy Lee Grahn) poisoning case, along with Dr. Neil Byrne (Joe Flanigan). Kendra Lennon (Michelle Argyris) kidnaps Alexis after knocking her out, and drives her to what she tells her is her “final destination”.

General Hospital spoilers seem to indicate that Lucas’ car wreck may be caused by trying to avoid Alexis, who has likely been placed in the road, after he takes his eyes off the road for a second and sees her, and also Kendra gunning her car to run her over, since that is how her younger brother Kiefer Bauer (Christian Alexander) died when Alexis accidentally ran him over. She may be trying to recreate Kiefer’s death with Alexis as her victim. Sonny Corinthos (Maurice Benard) will comfort his and Alexis’ daughter Kristina Corinthos-Davis (Lexi Ainsworth) who will likely blame herself.

Willow Tait (Katelyn MacMullen) is anxious to know the truth when she takes a pregnancy test. She is not sure how her boyfriend, Detective Harrison Chase (Josh Swickard) will react if she is pregnant and they haven’t even seriously discussed marriage yet, although they have moved in together.

Willow will confide in Sasha Gilmore (Sofia Mattsson) when she gets her results, since Sasha had shown concern earlier in a previous episode last week but Sasha didn’t want to talk about it to her then.

As General Hospital viewers will recall from previous General Hospital episodes, Franco “Frankendrew” Baldwin (Roger Howarth) decided, in his Drew Cain (Billy Miller) persona, to move forward with the memory transfer reversal procedure, deciding he didn’t have the right to occupy Franco’s body. During this week, plans will be firmed up for the procedure.

Elizabeth Baldwin (Rebecca Herbst) will be surprised, and by the end of the week Franco will complete an important project, possibly the memory transfer reversal procedure itself. Meanwhile, Peter August (Wes Ramsey) will gather his possessions, possibly in case he has to go on the run and flee Port Charles if the procedure only brings back more of Drew’s memories, which could expose his culpability in Drew’s original kidnapping out of Afghanistan!