The Young and The Restless Weekly Spoilers December 2 to 6: Nick Doesn’t Trust Adam, Chelsea Reassures Him – Connor Needs Family Together 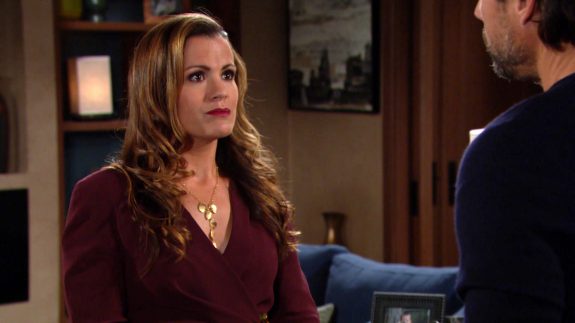 Y&R Spoilers: Connor Newman Needs Both Of His Parents Now

At the home that Chelsea has been sharing with her boyfriend, Nick Newman (Joshua Morrow), she tells Nick that Connor needs both his parents right now as she tries to explain to him why she’s moving in temporarily with Adam Newman (Mark Grossman), Nick’s brother, Connor’s father, and her ex-husband!

She tries to explain Connor’s condition and his fears, and that he needs both his parents right now, and she’s willing to make a deal with the devil if it means that Connor will feel safe! A scene of Adam, Chelsea, and Connor sitting on Adam’s couch as a smiling, happy family appears. This may be indicative of Nick’s worst fears concerning his and Chelsea’s future! Nick definitely feels threatened emotionally by this situation!

Young And The Restless Spoilers: Adam Newman Is The Devil, As Far As Nick Newman Is Concerned!

Nick is certainly not happy with this turn of events. He is shown at a table having a beer with another gentleman, who obviously knows Adam and the situation. It’s probably not his father, Victor Newman (Eric Braeden) since Victor is for Adam. He tells his friend that Adam’s clearly using this situation with Connor “needing both his parents” to draw Chelsea closer to himself.

A scene appears of Adam stroking a sleeping Chelsea’s cheek, as she has fallen asleep on his couch. As far as he’s concerned, when Chelsea says she’s willing to make a deal with the devil, Adam is the devil! Perhaps Nick has a point – but is it Adam taking advantage of the situation to draw Chelsea closer to himself, or is it Connor who is acting out because he wants Mommy and Daddy and himself to be a real family again? Connor may just have inherited his father’s scheming, manipulative side and he may be using it!

Young And The Restless Spoilers: Billy Is Stranded Overnight With Amanda, Will Victoria Be Jealous? https://t.co/HSiJxybXYX pic.twitter.com/rXG2pBxTEQ

Chelsea continues to talk at Nick at home, and desperately tries to convince him that he does not need to feel emotionally or romantically threatened by her moving in with Adam to make Connor feel safe, and that it truly is all about Connor. She tells Nick he is the only man in her heart, and is incredulous that he would think there was actually something going on between her and Adam!

However, Nick not only doesn’t believe her, he doesn’t trust her, either! He says to Chelsea that he thinks there aren’t any lines that she wouldn’t cross! This is obviously not what Chelsea wants to hear, and she will not respond well to Nick essentially trying to make her choose between him and her child! After all, Nick is a grown man, and Connor is a child – he’s her baby!