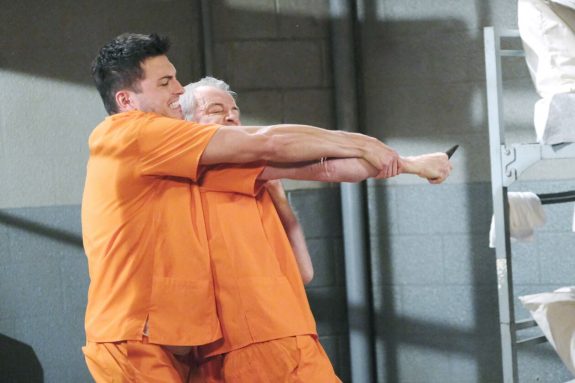 Days of Our Lives (DOOL) spoilers for Tuesday, December 3, tease that Ben Weston (Robert Scott Wilson) will pay the price for coming to Will Horton’s (Chandler Massey) rescue. The shiv meant for Will will end up plunging into Ben instead. As blood gushes from Ben’s stab wound, Will will take off his shirt and frantically try to stop the bleeding. He’ll also give Clyde Weston (James Read) an earful for attacking his own son.

DOOL Spoilers: Ben Weston  Will Pay The Price for Coming To Will Horton’s Rescue

Whether Clyde meant to or not, he may suggest that Ben deserves it for getting in his way. Clyde was determined to get rid of Will, so he won’t be pleased that Ben botched his plan. The good news is Ben will make a full recovery. The bad news is his legal woes may get worse!

Getting involved in a prison fight isn’t the best idea since Ben’s on death row and only has one appeal left. There’s a good chance it won’t matter that Ben was saving Will’s life. No one ever believes his side of the story except for Ciara Brady (Victoria Konefal) and now Will. Days of Our Lives spoilers say Clyde will be thrown in solitary confinement again, so at least he won’t be a problem for a while.

As for Ciara, she’ll use that drill to open Xander Kiriakis’ (Paul Telfer) metal box. Will there be evidence that proves helpful inside? DOOL fans know Ciara’s desperate for some, so she’ll certainly hope so. Meanwhile, Eric Brady (Greg Vaughan) will face Nicole Walker’s (Arianne Zucker) emotional plea. She’ll pour her heart out and beg for forgiveness, but Eric may not be willing to move past the paternity secret just yet.

Days of Our Lives Spoilers: Brady and Nicole Comfort One Another – Will Eric Come Back to See Them Together? https://t.co/4QaVY3ms3C pic.twitter.com/skjh4ZcAk7

Other Days of Our Lives spoilers say Sonny Kiriakis (Freddie Smith) will head over to Rafe Hernandez’s (Galen Gering) place. He’ll want to return a scarf that Evan Frears (Brock Kelly) left behind at the Kiriakis mansion on Thanksgiving. Evan will offer Sonny some pie, so Sonny will come in for a bit and chat about his struggles. He’ll appreciate Evan lending a sympathetic ear once again.

Sonny and Evan will grow closer, but Rafe’s return will interrupt their warm moment. As Evan says goodbye to Sonny privately, he’ll end up planting a kiss that catches Sonny off guard. Days spoilers say Sonny will be flattered by Evan’s bold move, but he’ll choose to let him down gently. After all, Sonny’s still married to Will and has a lot of complicated feelings to work out.

Another exciting episode’s coming up, so stay tuned. We’ll give you updates as other Days news and rumors emerge. Stick with DOOL and don’t forget to check back often for the latest Days of Our Lives spoilers, rumors, updates and news.