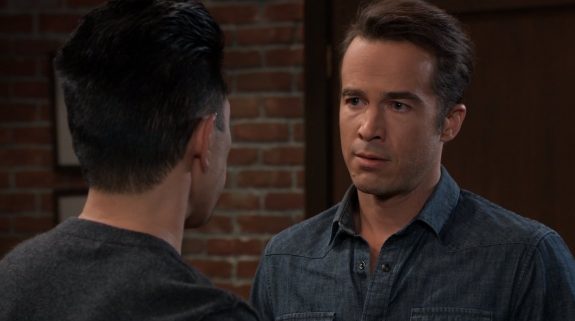 Franco could come back with more finely tuned Drew Cain (Billy Miller) memories. Anna and Robert argue about Finn. Robin Scorpio Drake (Kim McCullough) calls and asks if Anna is fighting with Robert. Robert takes the phone and says yes. Maxie tells Peter how wonderful he is. Anna tells everyone dinner is ready. Finn and Violet pull the wishbone, Violet gets the larger piece.

General Hospital Spoilers: Jax Fed Up With Nikolas’ Antics- Will He Reveal That He Is Alive?

Monica says that Jason Morgan (Steve Burton) is taking his kids to see the Rockettes. Rocco talks about spending time with Dustin Phillips (Mark Lawson) at the parade. Brook and Lulu go outside and argue. Olivia, Ned, and Monica join them outside. Monica has Epiphany Johnson (Sonya Eddy) to come take the Quartermaine dinner so they can have pizza. Monica tells Ned he needs to find out why Brook Lynn is in town. Monica says Brook always has an agenda. Olivia goes to check on dinner. Olivia screams, her dinner has disappeared. Franco has brought wine to Monica. Franco comments on the chaos. Monica explains this is normal.

Carly checks with Sonny Corinthos (Maurice Benard) to make sure the fire is out on the terrace. Everyone is trying to keep things normal for Sonny. Carly goes outside and wants Sonny to come inside. Sonny doesn’t want to be the guy that doesn’t see who is around him. Sonny needs a minute alone. Jocelyn asks how Sonny is doing. Carly says he could be worse and goes to make a phone call. Sasha Gilmore (Sofia Mattsson) asks why the Quartermaine’s always have pizza. Carly explains.

General Hospital’s Brad Cooper (Parry Shen) admits to lying to Lucas Jones (Ryan Carnes). Brad claims it has to do with Liesl Obrecht (Kathleen Gati). Lucas tells Brad to stop lying to him. Lucas tells Brad if they were alone, they could cut their losses and end this but they aren’t. Lucas says if they weren’t going to stay together, they should have never adopted.

Carly interrupts and wants Lucas to come to dinner. Lucas tells Brad he’s going to Carly’s for dinner. Lucas is driving Brad’s car. Lucas says everything changed when they got their son. Lucas thinks Brad didn’t want a child. Brad says things did change when they got their son but not how he thinks. Lucas demands answers from Brad. Brad blurts out that Wiley Cooper Jones (Theo and Erik Olson) isn’t the baby they adopted, he’s Michael and Nelle’s son. Lucas comes upon Kendra’s car and realizes he has no brakes.

General Hospital’s Franco prepares to go to the Quartermaine’s for Thanksgiving. Liz Baldwin (Rebecca Herbst) tells Franco he will have an experience. Liz thanks Drew for having the procedure done. Epiphany Johnson (Sonya Eddy) says Franco is a brave guy. Liz doesn’t know how to thank Drew for his sacrifice. Liz asks Epiphany about the food in the lounge, it’s not hospital food. Epiphany says it’s just another thing to be thankful for this year.

General Hospital’s Kendra Lennon (Michelle Argyris) has knocked out Alexis Davis (Nancy Lee Grahn) in her vehicle. Kendra injects something to wake Alexis up. Kendra says this is the end of the road. Kendra has given Alexis something to paralyze her. Kendra blames Alexis for not having a home-cooked meal for Thanksgiving since Keifer’s death. Kendra put Alexis in the road and plans to run over her like she did Keifer Bauer (Christian Alexander).