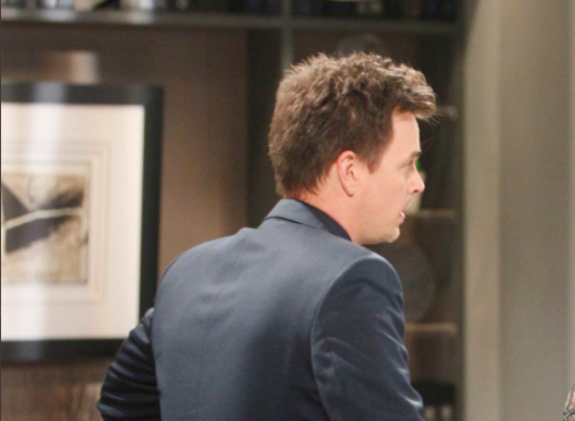 The Bold and the Beautiful spoilers for Tuesday, December 3, tease that Quinn Forrester (Rena Sofer) will demand some answers. As B&B viewers know, she and Shauna Fulton (Denise Richards) are good friends and that’s why Shauna’s currently staying at the Forrester mansion guest house. Well, Quinn is going to want to hear all the details from Shauna when she spies Ridge and Shauna kissing in the Forrester living room.

Shauna has just told Ridge that she loves him and the two have been cuddling on the couch and talking about how they’re going to take their burgeoning relationship slowly. But before Ridge leaves, it looks like the two will share some more steamy kisses, which Quinn will see, most likely when she walks into the living room.

The Bold And The Beautiful Spoilers: Katrina Bowden Returns As Flo Fulton

Quinn will want to get the scoop from Shauna about what’s going on between her and Ridge. A lot more has happened since the last time Quinn and Shauna talked about the situation – after all, since then, Ridge has walked out on his marriage to Brooke Forrester (Katherine Kelly Lang). That will probably surprise Quinn, and she’ll hear all about how Shauna has been there for Ridge when Brooke hasn’t been.

Meanwhile, on Tuesday’s new episode of B&B, Ridge will find himself in fantasy land. According to B&B spoilers, he’ll start daydreaming about Shauna after the two of them part company. It looks like Shauna will remain front and center on Ridge’s mind as the day progresses, and he might even relive their passionate kisses.

Finally, Wyatt Spencer (Darin Brooks) will have some serious questions for Sally Spectra (Courtney Hope). As B&B viewers know, she was having a conversation with Wyatt about their wedding plans, when she referred to him by his brother Liam Spencer’s (Scott Clifton) name. That really seemed to throw Wyatt, especially since he was already suspicious that there was something that was holding Sally back from wanting to move forward with wedding plans.

According to B&B spoilers, Wyatt will want to probe Sally’s feelings for both him and Liam. Of course, it doesn’t seem like Sally has had any unresolved feelings for Liam, and her sudden use of his name when referring to Wyatt really seemed to come out of nowhere. But given that Wyatt already had doubts about his engagement to Sally, this situation might give him the “out” he needs to call off the engagement.

As B&B viewers know, it’s been a couple years since Sally and Liam shared a kiss and had a brief flirtation. It’s possible that there are some lingering feelings there, but it seems doubtful at this point. Still, Wyatt will want to get to the bottom of where all of this came from, and B&B spoilers say that he’ll even make a big declaration about his future.

Might Wyatt call off his engagement to Sally over this whole deal? Given that he’s going to make a big declaration, it sounds like he might. Do you think this could be the end of “Wally?”