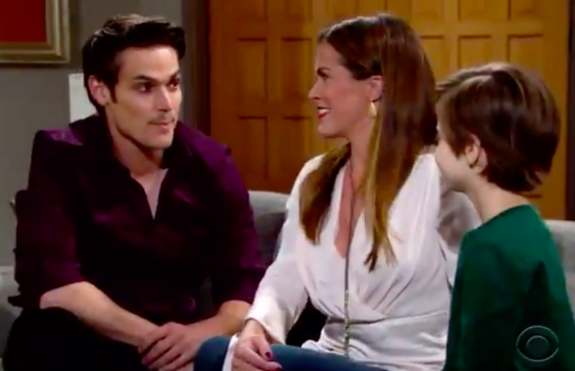 The Young and the Restless spoilers for Tuesday, December 3, tease that Billy Abbott (Jason Thompson) and Amanda Sinclair (Mishael Morgan) will realize that they’re stuck at the Dive bar where they met earlier. They’ll sit together as the lights go out, and throughout the course of their conversation, Amanda will note that Billy seems lost. He’ll reply that he took a wrong turn and that he’s taken a few in his lifetime, and that he sometimes thinks he’s playing a role in his life and that he doesn’t know what makes him happy.

Next on Y&R, at Newman Enterprises, Victoria Newman (Amelia Heinle) will get a visit from Rey Rosales (Jordi Vilasuso), who has updates about a theft at the Newman warehouse. He’ll be telling Victoria about the weather conditions as the power goes off. They’ll realize that they’re locked in the office, which will result in them both trying to get the door open. Ultimately, Victoria will hit the door with her shoe and it will open. They’ll celebrate.

Next on Y&R, Phyllis Summers (Michelle Stafford) will show up at Nick Newman’s (Joshua Morrow) house to see Chelsea Lawson (Melissa Claire Egan), who won’t be there. Phyllis will snark about Chelsea moving into Adam Newman’s (Mark Grossman) place, upsetting Nick. Suddenly the lights will go out due to the storm, and they’ll be stuck together.

Young And The Restless: Phyllis Summers & Nick Newman Ride Out The Storm

They’ll play a video game on their phones as they wait out the storm and they’ll discuss various topics, including his long-term struggle with being a Newman and their relationship with each other. Their discussion will at times be contentious and at times be friendly, and they’ll even joke about their romantic relationship being fierce and intense.

Next on Y&R, Chelsea will arrive at Adam’s place and they’ll talk about Nick’s distrust of Adam. The power will go out, and Connor Newman (Judah Mackey) will cry out from upstairs, and once they’ve got him downstairs, he’ll claim that the “monster” is present. After they get him back to bed, they’ll talk about what’s going on with Connor and Adam will wonder how they got there.

Young and the Restless (YR) Spoilers: Nick Losing Chelsea – Her Heart Is With Adam And Connor @celebratesoaps https://t.co/PxO4Q7Coxv

Meanwhile, back at Nick’s place, Phyllis will be about to touch Nick when the power comes back on. She’ll put on her jacket and leave after Nick thanks her for the walk down memory lane. And at the dive bar, the power will return, and Billy will tell Amanda to look him up the next time she needs to ride out a storm.

Finally, on Tuesday’s new episode of Y&R, Victoria will be back home texting Billy to see if he’s still meeting with Jack Abbott (Peter Bergman). Billy will then arrive, and they’ll hug as he says he’s glad to be home.