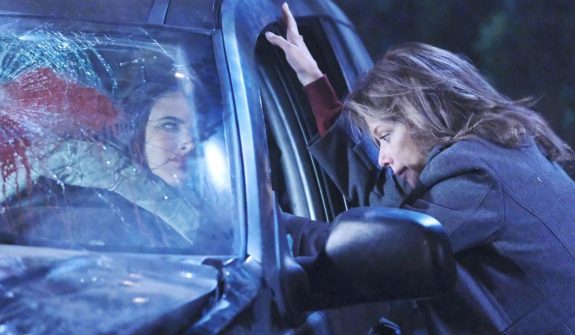 Alexis Davis (Nancy Lee Grahn) begins to regain her ability to move after the crash. Alexis tries to struggle to her feet. Alexis makes it to Kendra’s car to check on her. Kendra comes to and grabs Alexis. Alexis wants to call for help. Kendra says it’s too late. Kendra dies after threatening Alexis.

Neil tells Julian that Kendra doesn’t have a pulse. Julian speaks to Alexis and she tells him what happened. Julian sees Brad Cooper’s (Parry Shen) car when Alexis tells him there was another vehicle. Alexis tells Neil how bad things were. The ambulance arrives, Alexis asks how Neil found her. The cops arrive and Neil gives them a statement. Neil needs to get Alexis to the hospital. Neil tells the cops to check on the other people. Neil takes Alexis to a vehicle. Kendra is pronounced dead. Julian gets to Brad’s car and apologizes to Brad. Julian says Brad forced his hand but at least he saved Alexis. Julian realizes that Lucas Jones (Ryan Carnes) was driving. Julian tries to get Lucas’ attention, he doesn’t answer. Julian asks the cops for help.

General Hospital’s Willow Tait (Katelyn MacMullen) is at the hospital reading a brochure when Harrison Chase (Josh Swickard) arrives with a sandwich. Willow and Chase talk about kids including Wiley Cooper-Jones (Theo and Erik Olson). Chase is afraid of having kids. Chase gets called away promising to see Willow at home. Willow calls Sasha Gilmore (Sofia Mattsson). Willow is afraid to take a pregnancy test. Sasha tells Willow she’s coming to join her. Sasha arrives to talk to Willow.

Willow doesn’t want to know if she’s pregnant. Sasha supports Willow. Willow tells Sasha that Chase said he would rather be an uncle than a father. Sasha tells Willow that guys don’t dream about being a dad until it’s a reality. Willow tells Sasha if she’s pregnant, she can keep the baby this time. Sasha brings Willow a pregnancy test. Sasha tells Willow she needs to talk to Chase about this. Willow doesn’t want to mess this up. Sasha can’t believe Michael Corinthos (Chad Duell) stood by her. Sasha tells Willow that Chase will make things work. Sasha pushes Willow to take the test. Willow comes back and Sasha asks about the results.

GH Spoilers: Carly Corinthos Tells Jax Jacks To Back Off

General Hospital’s Jordan Ashford (Briana Nicole Henry) and Curtis Ashford (Donnell Turner) celebrate their anniversary. Curtis gives Jordan a printing of their wedding vows. Curtis wants to take Jordan to an island for their honeymoon. Jordan gets called away on an emergency. Jordan and Chase arrive at the accident site.

General Hospital’s Sonny arrives at the hospital to speak to Kristina. Kristina explains that Kendra was Keifer Bauer’s (Christian Alexander) sister and she poisoned Alexis. Kristina blames herself for Kendra going after Alexis. Sonny tries to reassure Kristina. Neil and Alexis arrive. Kristina hugs Alexis who smiles at Sonny. Alexis tells Sonny and Kristina what happened with Kendra. Alexis tells Kristina that Kendra is dead. Neil tells Alexis that Kristina helped find her.

Kristina asks if Kendra mentioned Shiloh Archer (Coby Ryan McLaughlin) or the pledge. Alexis tries to reassure Kristina that this is not her fault. Neil wants tests done now. Kristina goes with Alexis. Curtis arrives and asks Sonny about Alexis. Curtis wants Sonny’s advice. Curtis asks how Sonny and Carly make it work so well. Sonny explains that he can Carly always have each other’s backs. Sonny tells Curtis not to keep secrets either. Neil agrees with Alexis, it’s over now, they need to move on. Alexis asks who was in the other car.

GH Spoilers: Hamilton Chase Tells Julian Jerome They Will Figure This Out

Julian is upset because Brad is doing better than Lucas and wants answers. Meanwhile, Jordan wonders why there are no skid marks at the scene.