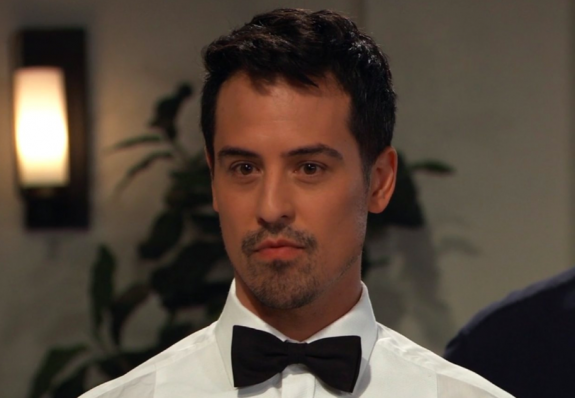 General Hospital (GH) spoilers for Wednesday, December 4, tease that some shockers are ahead in Port Charles. Before we get to those, we should note that impeachment hearings coverage will continue. GH may be preempted on Wednesday and bumped to Thursday instead, so just keep that possibility in mind.

Now let’s discuss all the action happening in PC. First, Sasha Gilmore (Sofia Mattsson) will grill Willow Tait (Katelyn MacMullen) about the results of her pregnancy test. General Hospital spoilers reveal that Willow indeed has a bun in the oven. She’ll be relieved in a way and a whole new kind of nervous in another! This is certainly big news, so Willow will have to determine how she’s going to break it to Harrison Chase (Josh Swickard).

In the meantime, Chase will deal with a worried Carly Corinthos (Laura Wright). She’ll be desperate for answers at GH, so Chase will tell her what he knows. Carly will get updates on the crash and Lucas Jones’ (Ryan Carnes) critical condition soon enough. Lucas will survive his surgery, but GH insiders insist he’ll be in a coma when he comes out. That’ll leave Carly on the hunt for a specialist – and those same insiders suggest Dr. Griffin Munro (Matt Cohen) will be who Carly turns to.

General Hospital Spoilers: Carly Corinthos Will Reach Out For Help

Carly will reach out for help within the next few episodes, but Michael Corinthos (Chad Duell) will want to help right now. It sounds like Michael will offer to take care of “Wiley Cooper-Jones” (Erik and Theo Olson) while the boy’s parents are recovering. Brad Cooper (Parry Shen) wasn’t as badly injured, but he’s still not in any shape to care for a child. It should be Michael’s pleasure to take over for the time being.

Bobbie Jones (Jacklyn Zeman) will get on the phone and summon someone to the hospital, so Julian Jerome (William deVry) may step away in hopes of figuring out how much the cops now. Perhaps Bobbie won’t realize Julian’s already in the loop on Lucas’ terrible ordeal.

Speaking of terrible ordeals, Ava Jerome’s (Maura West) nightmare will continue at Shadybrook. She’s been through a lot ever since Nikolas Cassadine (Marcus Coloma) revealed himself to her at the gallery. Nik vanished soon after, so Ava committed herself and fears she’s been losing her mind. When Nikolas shows up in her room, Ava will wonder how he can be dead and there with her at the same time.

Nikolas will insist that Ava’s going to make amends. There’s a chance it’ll be in Ava’s head, but it certainly seems like it’ll be a real encounter. Nikolas may share the whole story and explain what he’s trying to accomplish. He should push for Ava’s cooperation with the portrait as well as her silence. Nikolas will think Ava owes him this much since she recanted her statement against Valentin Cassadine (James Patrick Stuart).

Other General Hospital spoilers say Jasper “Jax” Jacks (Ingo Rademacher) will corner Valentin and demand to know what he did with Hayden Barnes (Rebecca Budig). Of course, GH fans know it’s Nikolas who ran Hayden out of town! Jax should find that out eventually, but he’ll take the opportunity to blast and interrogate Valentin on Wednesday.

General Hospital Spoiler: Hamilton Finn Will Have a Heated Encounter

Over with Hamilton Finn (Michael Easton), he’ll have a heated encounter of his own. Finn will angrily ask someone what’s going on as Anna Devane (Finola Hughes) stands nearby. This concerned dad will probably be worried about Hayden, who left behind a letter that revealed she was in trouble.

Finn will want some answers for this vanishing act, but he’ll ultimately have to concentrate on Violet Barnes (Jophielle Love) and tell her that her mommy isn’t coming back – at least not anytime soon. General Hospital spoilers say another fantastic episode’s on the way. We’ll keep you posted as other GH details and rumors emerge. Stick with the ABC soap and don’t forget to check back often for the latest General Hospital spoilers, rumors, updates and news.