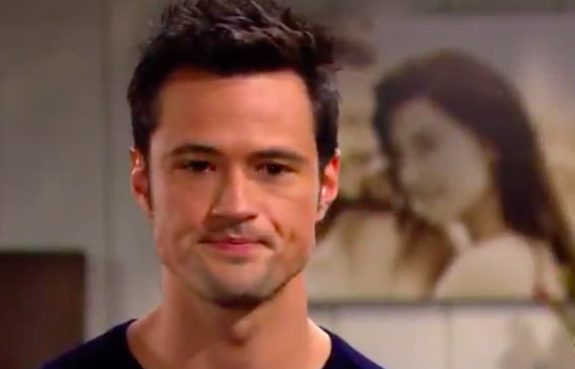 The Bold and the Beautiful spoilers for Wednesday, December 4, tease that Steffy Forrester (Jacqueline MacInnes Wood) and Ridge Forrester (Thorsten Kaye) will corner Thomas Forrester (Matthew Atkinson) about some of his recent decisions. Most notably, they’ll want to know what on earth Thomas was thinking when he signed the adoption papers drawn up by Hope Logan (Annika Noelle).

The adoption papers gave Hope full parental rights and joint custody of Douglas Forrester (Henry Joseph Samiri), which means that she’ll be his adoptive mother going forward. As B&B viewers know, Hope and Thomas recently told Douglas that Hope was his new mother, and Douglas was thrilled. Hope will get to weigh in on decisions regarding Douglas going forward and he’ll spend about half of his time with her and Liam Spencer (Scott Clifton).

The Bold And The Beautiful Spoilers: Steffy’s Confrontation Of Hope Revealed, Plus Has She Forgiven Thomas?

Of course, as B&B viewers know, this all suits Thomas just fine, since he wants to be forever linked to Hope. He’s still in love with Hope and thinks that the two of them could have a future together, and he’s hoping that Douglas will actually draw them closer over time. But Steffy and Ridge will probably point out that Thomas hasn’t really thought things through here – after all, he could have allowed Hope to help raise Douglas without actually signing papers making things legally binding.

And as B&B viewers know, at one time Hope had plans to eventually get full custody of Douglas. She wanted to first get joint custody, then later file for full custody on the grounds that Thomas was an unfit father. Now, whether she still intends to do that down the road remains to be seen, but Thomas has opened the door to that possibility by signing the adoption papers and giving Hope joint custody.

Steffy and Ridge will probably tell Thomas in no uncertain terms that he’s made a huge mistake in giving Hope so much power over Douglas’ life. However, Thomas will surely disagree. He seems to think he knows what he’s doing, and what he wants more than anything is for Hope to be a mother to Douglas.

‘The Bold and the Beautiful’ Spoilers: Wyatt Must Decide Between Sally and Flo – Coupling Options Considered https://t.co/wTN8oCYxYZ pic.twitter.com/WDLo29168L

Bold And The Beautiful Spoilers: Lope Spend Thanksgiving With Their Daughter

Meanwhile, on Wednesday’s new episode of B&B, Hope and Liam will spend their first Thanksgiving with their daughter Beth Spencer (River Davidson and Madeline Valdez). As B&B viewers know, there was a time when they never thought they’d see this day, and so they’ll be especially grateful to have their daughter with them and as a part of their lives.

Hope and Liam will surely take Beth to celebrate with the rest of the family, but they’ll also probably want to spend some time alone with their daughter, giving thanks for their family and counting their blessings. As B&B viewers know, Hope and Liam spent a good part of the year thinking that their daughter had died, so they’ll be very aware that this holiday season could have had a very different tone.

Viewers can expect some nice family scenes between Hope, Liam, and Beth as they revel in the spirit of Thanksgiving and look forward to the remaining holidays this year.