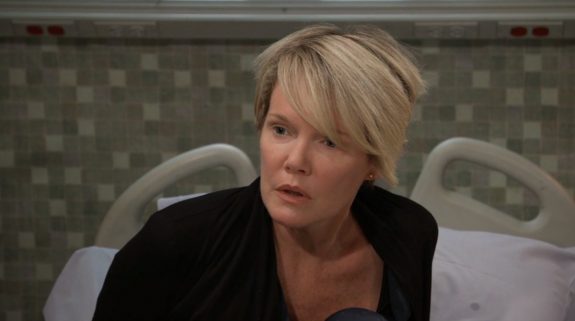 Anna tells Finn that Violet put the wishbone on her table. Anna assures Finn that she’s had plenty of experience with little girls. Anna promises to share her expertise with Finn. Anna questions if Finn is ok. Finn doesn’t know how to tell Violet her other is gone.

Finn and Anna are waiting to hear from Robert Scorpio (Tristan Rogers). Finn and Anna demand answers from Jasper Jacks (Ingo Rademacher). Jax says Hayden Barnes (Rebecca Budig) only worked for him at Aurora. Anna wants to help Hayden, Jax doesn’t know anything. Jax leaves asking Finn to keep him posted. Finn and Anna know Jax is lying. Anna tries to reassure Finn and promises to be there with him.

General Hospital’s Nikolas Cassadine (Marcus Coloma) pays a nurse to give Ava Jerome (Maura West) a new pill. Ava takes her medication. Ava sits on the floor and talks to Kiki Jerome (Hayley Erin). Ava begins to feel dizzy and lies down. Nik comes into the room, Ava believes he’s a ghost. Nik claims to be dead and in hell because of Ava. Nik continues to push Ava. Nik never thought Ava would betray him and Spencer. Nik asks where the portrait is.

Ava says a wave of darkness happened after Nik died. Nik says the portrait will right the wrong for his son. Nik says he’s seen Kiki, she’s in hell with him. Ava says Kiki cannot be with him. Nik tells Ava that Kiki is crying. Nik wants to know where the painting is. Ava tells Nik the painting is at her gallery. Ava begs for no more ghosts. Nik’s ring is under Ava’s bed.

General Hospital’s Valentin Cassadine (James Patrick Stuart) and Nina Reeves (Cynthia Watros) are having dinner. Nina tells Valentin about the guest she’s invited to the wedding. Valentin tells Nina about the codicil in the painting. Nina asks Valentin if he thinks Ava still has the picture. Valentin says Ava plans to start a bidding war over the picture. Nina thanks Valentin for being honest.

Jax comes in and attacks Valentin demanding to know what happened to Hayden. Nina breaks up the argument between Jax and Valentin. Valentin knows Hayden and Jax are trying to take his inheritance from him. Jax demands to meet Nik immediately or he’s going to the cops. Nina wants the truth from Valentin. Valentin tells Nina he has to get to the gallery. Nina calls Shadybrook to visit Ava.

General Hospital’s Carly Corinthos (Laura Wright) and Jasper Jax (Ingo Rademacher) are discussing Nik. Michael Corinthos (Chad Duell) arrives and is shocked Wiley Cooper-Jones (Theo and Erik Olson) is still there. Carly gets a call to come to the hospital and leaves.

General Hospital’s Harrison Chase (Josh Swickard) arrives at the hospital and tells Sasha Gilmore (Sofia Mattsson) and Willow Tait (Katelyn MacMullen) about the accident. Sasha goes to give Michael an update on the accident. Michael brings the baby downstairs and offers him ice cream. Sasha and Michael discuss their updates. Carly calls Michael saying she doesn’t know how long she will be. Willow arrives to check on Wiley.

Willow asks if she can wait with Carly and Bobbie. Willow feels sorry for Julian. Carly tells Willow what happened to Morgan Corinthos (Bryan Craig). Lucas is critical but stable condition. Lucas’ brain was swelling. Lucas is in a medically induced coma. Carly and Bobbie talk about Lucas’ condition. Bobbie goes to see Lucas, Carly offers to let Julian go first. Bobbie asks Lucas how this happened. Bobbie encourages Lucas to keep fighting. Julian tells Carly she should go in with Bobbie instead. Carly tells Lucas he needs to do what the doctors say and get better. Lucas’ isn’t allowed to miss Christmas. Carly tells Lucas about his son’s outfit she got him. Carly tells him to heal and wake up. Bobbie asks Julian to sit with Lucas while she updates Brad.

General Hospital’s Brad wakes up. Willow and Chase give Brad an update on Lucas. Chase questions Brad about the accident. Brad says they were headed to Sonny Corinthos’ (Maurice Benard) for dinner. Brad tells Chase the brakes failed. Brad demands to see a doctor so he can be with Lucas. Julian apologizes to Lucas. Brad and Bobbie overhear Julian apologizing and asking for forgiveness. Julian claims to be sorry for pushing Lucas away. Julian goes outside, Carly tries to comfort him as Brad and Bobbie talk to Lucas.