The Bold and the Beautiful Spoilers: Thursday, December 5 – Steffy Lashes Out At Hope – Thomas Ups His Game Against Liam 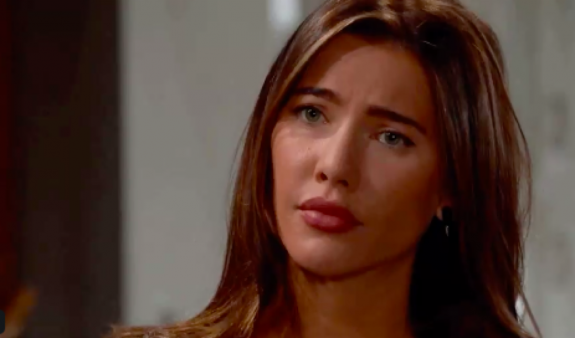 The Bold and the Beautiful spoilers for Thursday, December 5, tease that Steffy Forrester (Jacqueline MacInnes Wood) will have a few things to say to Hope Logan (Annika Noelle). As B&B viewers know, Hope recently kept a terrible secret about Steffy’s brother, Thomas Forrester (Matthew Atkinson). Hope thought that she had killed Thomas by inadvertently pushing him into an open vat of hydrofluoric acid, but as it turned out the vat was filled with cleaning solution and Thomas survived the ordeal.

However, Hope truly believed that Thomas had died, but instead of reporting the incident to the police, she simply went home and told her mother Brooke Forrester (Katherine Kelly Lang) what had happened. Together, she and Brooke kept the secret about what had supposedly happened to Thomas for a full 24 hours, until Thomas revealed himself to Hope and demonstrated that he was really alive.

The Bold and the Beautiful Spoilers: Shauna Makes a Declaration of Love – Does She Tell Ridge How She Feels?

Well, according to B&B spoilers, Steffy will decide that she and Hope need to have a little talk about what Hope did. She’ll show up at Hope’s cabin and confront her about thinking that she had killed Thomas and failing to report it. Steffy will probably wonder if Hope really would have come forward with the truth, or if she was planning to conceal Thomas’ “death” forever. Hope will have some serious explaining to do, as Steffy calls her out on her actions.

Steffy may also want to know what on earth Hope was thinking in taking partial custody of Douglas Forrester (Henry Joseph Samiri). It’s pretty clear that Steffy doesn’t agree with Thomas’ decision to sign the adoption papers and allow Hope to be Douglas’ adoptive mother, so she may needle Hope about this as well. Steffy might even point out that Liam Spencer (Scott Clifton) isn’t thrilled about the development, which will probably irk Hope.

Meanwhile, on Thursday’s new episode of B&B, Thomas will have his own confrontation with Liam. The two men will verbally spar, although exactly how their confrontation will come about remains to be seen. They may encounter each other as Thomas is picking up Douglas for the Thanksgiving holiday, or perhaps Hope and Liam will make an appearance at the Forrester Thanksgiving celebration in order to be with Douglas.

However it happens, they’ll exchange words, and according to B&B spoilers, Thomas will decide to up his game against Liam. This will most likely involve Thomas’ big plan to forge a relationship with Hope. Of course, at this point Hope doesn’t want any sort of relationship with Thomas other than a co-parenting relationship where Douglas is concerned, but Thomas has convinced himself that he can ultimately woo Hope.

The Bold And The Beautiful Spoilers: Fashion Competition Gets Intense As Steffy And Hope’s History Fuels The Fire https://t.co/1rHRvXiWye pic.twitter.com/gSVf5j0ErL

According to B&B spoilers, Liam will mention to Thomas that Hope is planning to retire from Forrester Creations in order to spend more time with Beth Spencer (River Davidson and Madeline Valdez). Of course, Thomas won’t like hearing that, since Forrester Creations is a place that he can have contact with Hope without Liam around. That will apparently give Thomas an idea, and by week’s end B&B viewers can expect him try to get Hope to return to Forrester.

Thomas will want Hope to come back to work so that they can revitalize the Hope For The Future line that was Hope’s baby in the past. The Bold and the Beautiful spoilers say that Thomas will even get Douglas to try to help convince his new mother to work on the line with Thomas, which sounds like a sneaky move. At any rate, Thomas will do his best to get Hope to return to Forrester and work closely with him.