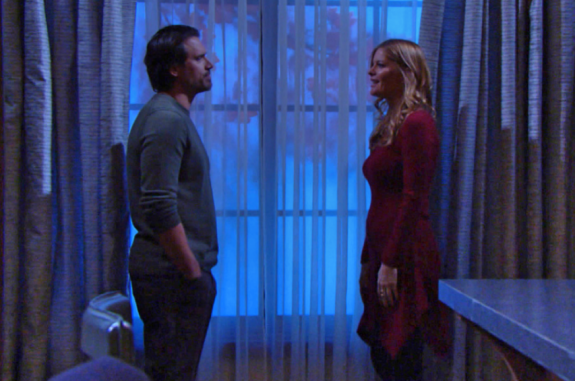 The Young and the Restless spoilers for Thursday, December 5, tease that Chelsea Lawson (Melissa Claire Egan) and Connor Newman (Judah Mackey) will be doing homework when Adam Newman (Mark Grossman) arrives home and says Sharon Newman (Sharon Case) is coming over. Connor will go upstairs and eavesdrop as Adam and Chelsea talk about doing whatever they can to help him recover.

Chelsea and Adam will head to Crimson Lights where they’ll discuss the monster that Connor says lives inside him. Adam will think that the monster is darkness inherited from him and Victor Newman (Eric Braeden), but Chelsea will balk at that. She’ll say that Adam reacted to Victor, and that he loves Connor. They’ll end up getting brownies and make plans for later.

The Young and the Restless Spoilers: Adam Provokes Phyllis – Will She Retaliate?

Y&R Spoilers: Connor Newman Schemes To Keep His Parents Together

Next on Y&R, Sharon will be at the penthouse talking with Connor about his monster. He’ll tell her that he says “Can’t beat three, Mom and Dad and me” to himself to keep the monster away, and that this works, and he doesn’t need her to come around anymore. After Chelsea and Adam come home, Sharon will say that Connor said that being with them is the best medicine.

After Sharon leaves, Connor will learn that they’re going to hang out as a family and have some fun – he’ll be thrilled. Later, Adam and Chelsea will talk alone and think that Connor is doing better but that he should still see Sharon for help. But Connor will be on the stairs and will whisper: “Sharon go away, can’t beat three, Mom and Dad and me.”

Next on Y&R, Devon Hamilton (Bryton James) and Nick Newman (Joshua Morrow) will discuss New Hope business at Society. They’ll discuss their lives, rehashing the situation with his missing money and what’s going on with Amanda Sinclair (Mishael Morgan). Nick will fill him in on how Chelsea has moved in with Adam.

Young And The Restless Spoilers: Abby Newman’s In Possession Of The Stolen Jewelry

Next on Y&R, at The Grand Phoenix, Abby Newman (Melissa Ordway) will talk briefly with Chance Chancellor (Donny Boaz) about Phyllis Summers’ (Michelle Stafford) recent behavior and Abby’s determination to fire her. Chance will leave and Phyllis will arrive, and Abby will accuse her of using the hotel’s security system to spy on people. Abby will then tell Phyllis to leave the hotel and that she’s banned from the place.

The two women will then argue, and Phyllis will storm out. Chance will return and they’ll discuss the recent jewel thefts at the hotel, and Chance will think that it might have been an inside job. Abby will ask him out, and he’ll return later to have a drink with her, but they’ll bump into each other and the contents of her purse will spill out…which include the stolen jewelry.

Next on Y&R, Phyllis will find Nick at Society and gripe about Abby firing her. Nick will point out that he has his own issues to contend with, and he’ll proceed to explain that he thinks that Adam is using Connor’s problems to get closer to Chelsea. Phyllis will think that perhaps Nick would be better off without Chelsea, and that history is repeating itself with Chelsea. Ultimately Nick will leave in disgust.