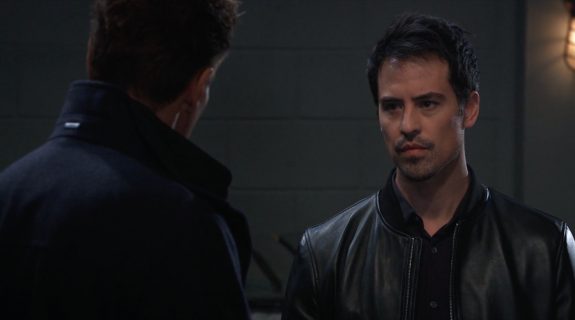 Jax tells Nik that Hayden Barnes (Rebecca Budig) has left town. Nik tells Jax that Hayden thinks she’s in danger but she isn’t. Jax curses Nik and says you did this. Nik tells Jax he staged an attack on Hayden to get her to leave town. Nik claims to be putting Hayden’s safety first. Jax reminds Nik he is supposed to be the good Cassadine. Nik says Ava told him where the portrait is and he could have it tonight.

General Hospital’s Martin Gray (Michael E. Knight) and Valentin Cassadine (James Patrick Stuart) break into the gallery to search for the painting. Martin is leaving paintings thrown all over the place. Valentin tells Martin to be more careful, he’s leaving evidence. Someone comes into the gallery forcing Martin and Valentin to hide. Valentin pulls a gun on Nik and demands he takes off the mask. Nik fights with Valentin but gets away. Valentin tells Martin there is something familiar about the guy.

General Hospital’s Nina Reeves (Cynthia Watros) visits Ava Jerome (Maura West) who tells her Nik is haunting her. Ava doesn’t want to see any more ghosts. Nina asks what kind of medication Ava is on. Ava says they gave her orange pills this time instead of the white ones. Nina has to leave, Ava begs her not to go. Nina bends down to get her stuff and finds the Cassadine ring. Ava tells Nina that Nikolas had a ring just like that. Ava tells Nina that Nik wanted the portrait. Nina tells Ava that Nik is alive and tormenting her to get what he wants. Nina wants to join forces with Ava against the Cassadine men.

General Hospital’s Sam McCall (Kelly Monaco) is Nelle Benson (Chloe Lanier) new cellmate. Nelle starts to push Sam’s buttons who tells her no one wants her to come home. Nelle goes on about Carly Corinthos (Laura Wright) relationship with Jason Morgan (Steve Burton). Sam and Carly are glad Michael has Sasha. Nelle can’t want to be released. Sam asks Nelle if she really wants out considering she tried to kill Michael. Chase stops by to visit Sam. Chase tells Sam about the car accident. Chase tells Sam that Lucas is on life support and they don’t know if he’s going to make it. Chase tells Sam that Michael has Wiley.

Chase arrives to check on Willow. Michael asks Chase was the accident and who would want to kill Brad Cooper (Parry Shen) or Lucas Jones (Ryan Carnes). Michael needs to take food to the hospital for Carly. Sasha offers to do it for him. Wiley cries and Willow goes to him. Sasha runs into Jax who accuses her of helping Valentin.

General Hospital’s Julian Jerome (William DeVry) and Bobbie Spencer (Jackie Zeman) are waiting outside Lucas’ room. Sonny Corinthos (Maurice Benard) and Carly Corinthos (Laura Wright) are waiting in the hallway. Harrison Chase (Josh Swickard) arrives with an update. Chase tells them that Brad said something was wrong with the brake on the car. Brad’s car has been impounded and will be investigated. Bobbie is with Lucas, Julian volunteers to leave. Bobbie stops him saying Lucas needs all their love.

Sonny tells Carly he will go home to the baby. Sonny tells Julian he can come by the house to visit Wiley. Brad comes back to Lucas’ room. Epiphany Johnson (Sonya Eddy) tries to make Brad go back to his room but he refuses. Epiphany says Lucas will be mad at both of them if he doesn’t rest. Brad says if he’s mad, he’s alive. Brad goes to sit with Lucas and begs him for forgiveness. Sonny tells Michael to let Julian into the house. Michael brings Wiley downstairs.