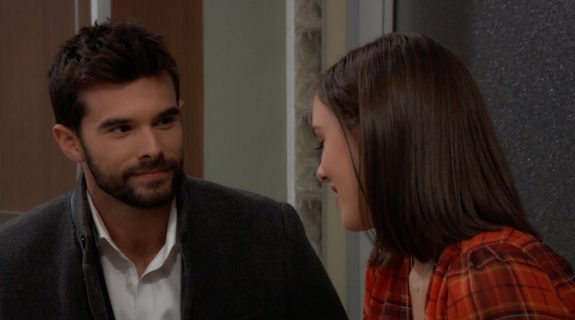 General Hospital (GH) spoilers for Friday, December 6, tease that Lulu Spencer (Emme Rylan) will be agitated as she delivers some big news. She’ll tell Maxie Jones (Kirsten Storms) that Brook Lynn Ashton’s (Amanda Setton) back in town and will undoubtedly mention that they had a Thanksgiving showdown. Maxie won’t be surprised to learn Brook Lynn caused issues right away. She’ll do her best to offer support after Lulu vents.

GH Spoilers: Lulu Spencer Will Be Agitated And Delivers Some Bad News

Meanwhile, Olivia Quartermaine will tell Brook Lynn that she hasn’t even seen the half of it. GH fans know Olivia tried to play nice at the Thanksgiving gathering, but Monica Quartermaine (Leslie Charleson) didn’t like her approach. It seems it’s time for Olivia to take a stronger stance. Brook Lynn will walk all over Olivia and everyone else if she doesn’t!

Next, Willow Tait (Katelyn MacMullen) will have a significant discussion with Harrison Chase (Josh Swickard). It appears Willow will finally admit she had a pregnancy scare, which has led to more thoughts about kids and their future. Willow will think they need to open up about how they really feel, so they’ll indeed discuss topic of children and what they want someday.

At GH, Peter August (Wes Ramsey) will express remorse to Elizabeth Baldwin (Rebecca Herbst). He’ll suggest that if he’d made different choices, Liz wouldn’t be in the position she’s in. General Hospital spoilers say Liz may appreciate Peter’s apology, but she should put the blame back on Shiloh Archer (Coby Ryan McLaughlin). Naturally, Liz will remain in the dark on Peter’s bigger role in the memory-mapping project overall.

As for “Drew Cain” aka Franco Baldwin (Roger Howarth), he’ll do something to honor both the real Drew Cain (Billy Miller) and Oscar Nero Quartermaine (Garren Stitt). “Drew” will talk to Ned Quartermaine (Wally Kurth) in Friday’s episode. He’ll plan to do something that’s one of the last things he can do for Drew as “Drew.” It looks like “Drew” will hope to finish the treehouse that was part of Oscar’s dying wish.

Jason Morgan (Steve Burton) will also pay a surprising visit to Ned on Friday – and it seems he’ll have the same idea. Jason won’t let himself get too distracted though! Sam McCall (Kelly Monaco) is still his priority, so he’ll tell Sonny Corinthos (Maurice Benard) he’s going to take action so things work out the way he wants. Jason may have some scheme in mind that’ll help ensure Sam’s freedom.