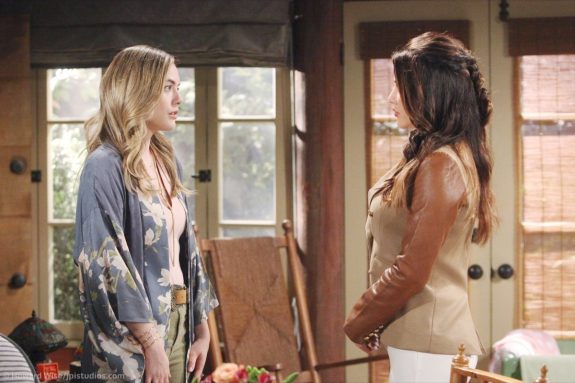 The Bold and the Beautiful spoilers for Friday, December 6, tease that Ridge Forrester (Thorsten Kaye) will made a dramatic move. As B&B viewers know, he walked out on Brooke Forrester (Katherine Kelly Lang) after he found out that she withheld the truth from him when she thought that Thomas Forrester (Matthew Atkinson) had died in a terrible accident at Forrester Creations.

In fact, not only has Ridge told Brooke that their marriage is over and said goodbye, but he’s also been spending time canoodling with Shauna Fulton (Denise Richards). It really seems like he’s resolved himself to moving on with his life, but before he does, he’ll want to make a last-ditch effort to save his marriage to Brooke.

The Bold and the Beautiful Spoilers: Wyatt Is Not Being Fair – Both Sally And Flo Demand Clarity

The Bold and the Beautiful spoilers say that Ridge will tell Brooke that they can work things out if she agrees to forgive Thomas. As B&B viewers know, Brooke’s feelings toward Thomas have been openly hostile for months now, and so what Ridge will ask Brooke to do will be difficult, but he’ll explain that it’s the only way forward in their marriage at this point.

But will Brooke be willing to forgive Thomas to save her marriage? Well, given that ongoing B&B spoilers say that Thomas is going to end up being pleased with a big decision that Ridge makes with respect to Brooke, it looks like “Bridge’s” marriage might be kaput, and that would indicate that Brooke doesn’t agree to Ridge’s terms.

The Bold And The Beautiful Spoilers: Brooke Makes Final Call On ‘Bridge’ Marriage – What Will She Decide? https://t.co/xn8S2NQIHS pic.twitter.com/YciWkUGFfa

Bold And The Beautiful Spoilers: Hope Logan Gets An Enticing Offer

Meanwhile, on Friday’s new episode of B&B, Hope Logan (Annika Noelle) will have a big decision on her hands. As B&B viewers know, she’s just been asked by both Thomas and Douglas Forrester (Henry Joseph Samiri) to come back to Forrester Creations and lead the Hope For The Future (HFTF) design team.

Of course, Hope had recently made the decision to stay home and spend time with her daughter Beth Spencer (River Davidson and Madeline Valdez), so coming back to work wasn’t something that she was planning on doing anytime soon. But then again, it was pretty clear that Hope was into the designs that Thomas had been working on, so she might give the idea of stepping back to work some serious thought.