The Young and the Restless Spoilers: Friday, December 6 – Connor’s Disturbing Behavior – Abby Revealed As The Thief – Nick Gets A Reality Check 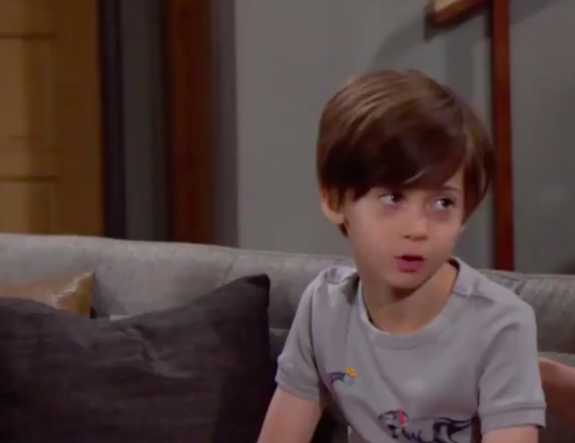 The Young and the Restless spoilers for Friday, December 6, tease that Connor Newman (Judah Mackey) won’t be happy to hear from Adam Newman (Mark Grossman) that Sharon Newman (Sharon Case) is on her way to the penthouse for another play session with him. Connor will listen from the stairs as Adam and Chelsea Lawson (Melissa Claire Egan) discuss doing whatever they can to help him get better.

While Connor visits with Sharon, Chelsea and Adam will go to Crimson Lights where they’ll talk about Connor and the monster that he says lives inside him. Adam will worry that the monster is the darkness inherited from him and Victor Newman (Eric Braeden), but Chelsea won’t think that’s the case. She’ll be more optimistic about things and will point out how much he loves Connor. Soon, Chelsea will have an idea, and they’ll end up getting a bag of goodies and some brownies for later.

Next on Y&R, Sharon and Connor will draw together at the penthouse, and then she’ll ask if they can discuss the last time she was there, since he was upset about the monster. Connor will tell her that he is now able to keep the monster away, and Sharon will ask him how he does that. He’ll reveal that it’s like casting a spell and that he says “Can’t beat Three. Mom and Dad and me” to himself to keep the monster away.

Connor will inform Sharon that she doesn’t need to come around anymore, and that he doesn’t need their talks. He’ll say that his parents are the ones helping him, and that when he’s with Sharon, he’s not with them. Later, Sharon will tell Adam and Chelsea that Connor has developed a coping mechanism, and that he stated that he didn’t want to see her anymore.

The Young And The Restless Spoilers: Theo And Summer—Move It To Next Level By Moving In Together?

Chelsea and Adam will tell Connor that they’re going to spend the evening together watching sports on TV and eating junk food, and they’ll give Connor a red jersey with his name on it. He’ll be happy and head upstairs to put the jersey on. Chelsea and Adam will privately discuss how Connor seems to have turned a corner, and that they’re going to have Sharon keep coming.

But Connor will be on the stairs listening to them, and he’ll start chanting to himself, “Sharon, Sharon go away. Don’t be here another day. Can’t beat three. Mom and Dad and me.” His parents won’t notice him there.

Next on Y&R, Abby Newman (Melissa Ordway) will call Phyllis Summers (Michelle Stafford) and ask her to come to The Grand Phoenix. Abby will have just learned from Chance Chancellor (Donny Boaz) that Phyllis had used the hotel’s security system to spy on devices hooked into the wifi. Abby will tell Phyllis that she’s fired, and the two women will argue fiercely before Phyllis leaves in a huff.

Later, Chance will return, and he and Abby will sit down for a talk. He’ll say that he’s been thinking, and that the recent jewelry thefts at the hotel could be an inside job. Abby will think that Phyllis was the thief, since Phyllis is basically responsible for everything. Abby will then ask Chance to tell her who the robber is over a drink, which Chance will accept.

Chance will have to run an errand first, so he’ll leave, and when he comes back, he’ll bump into Abby in the lobby. She’ll be carrying a big purse, which she’ll drop, and when the contents spill out, Chance will bend down to help her pick everything up. He’ll notice all the stolen jewels amongst her things. Abby will be horrified, and chance will say that their drink will have to wait.

Next on Y&R, Devon Hamilton (Bryton James) and Nick Newman (Joshua Morrow) will sit down to discuss New Hope business at Society. They’ll end up discussing their personal lives and all their current problems, including how Devon gave his fortune away and has to deal with Amanda Sinclair (Mishael Morgan) who looks just like Hilary Hamilton (Mishael Morgan). In addition, Nick will fill him in on how Chelsea has moved in with Adam.

The Young And The Restless Spoilers: Devon Hides A Secret- Will It Cause Tension With Elena? https://t.co/cN8iYIDpKs pic.twitter.com/M1I6wwvWLg

Later, while Nick’s sitting at the bar, Phyllis will show up and complain about Abby firing her until Nick mentions that he has his own issues to deal with. Phyllis will agree to listen to his troubles, and Nick will explain that he thinks Adam is using Connor’s issues to get closer to Chelsea. Phyllis won’t disagree, but she’ll also openly wonder if he’d be better off without Chelsea.

Phyllis will insist that Chelsea could be spending her evenings at Nick’s house after Connor went to bed, which Nick will clearly agree with. She’ll then go on to say that Chelsea was raised a con artist and that it’s in her nature to be deceitful and distrusting, to which Nick will reply, “like Adam.” Finally, on Friday’s new episode of Y&R, Phyllis will tell Nick to get out of the relationship before it costs him more than it already has. Nick will then leave aggravated.