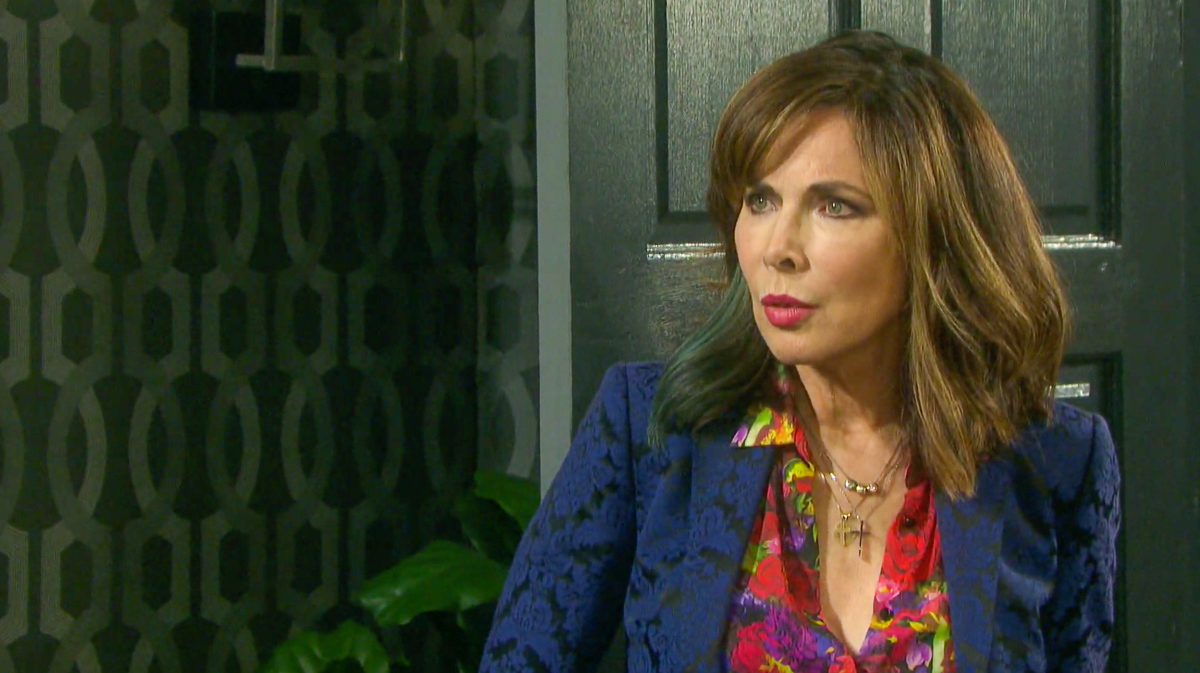 Days of Our Lives spoilers tease that Kate Roberts (Lauren Koslow) may have an ulterior motive for taking on a waitress job at Brady’s Pub, several steps down in the career world for her, and Kate’s secret motive will be revealed in an upcoming episode of Days of Our Lives!

Days of Our Lives Spoilers – Why Would Kate Roberts Take A Job At Brady’s Pub – Really?

Kate can really be a fashionista and yet there she was, in all her waitress glory taking an order from Kayla Brady (Mary Beth Evans)! Kayla was puzzled too, and even remarked on the odd sight! She’s many, many pay grades below what she is used to making; it’s true, the girl’s gotta eat, and maybe her ex of many years ago, Roman Brady (Josh Taylor) felt sorry for her and gave her the job. Maybe he’s even letting her stay in the apartment over the pub for free.

She and Roman are Rex Brady’s (Kyle Lowder) parents. Roman seems to be attracting ex-spouses these days, back before the time jump it was Anna DiMera (Leann Hunley) and now it’s Kate! But there may be more to it than Roman giving Kate the waitress job than meets the eye! They may be working together on another project entirely!

DOOL Spoilers – Kate Roberts Might Be “Undercover” In Her Own Way

It hasn’t really yet been revealed how exactly Adrienne Kiriakis (Judi Evans) died, and why Will Horton (Chandler Massey) is in prison for it if it was an accident. This story obviously has some missing pieces that Kate may be trying to put together in order to help Will. Roman, having been a cop in the past, may be helping her. With Roman as a bartender and Kate as a waitress they may hear some customers talking who may have been involved. It hasn’t been yet been revealed exactly where Adrienne died either but it could have been close to Brady’s Pub, since everything seems to happen in Horton Town Square and the pub is one of many businesses around the square.

It seems a lot of private citizens and relatives of police or retired police are taking investigations into their own hands these days, and it might be because their Police Commissioner is really Princess Gina, not Hope Brady (Kristian Alfonso)! Ciara Brady (Victoria Konefal) is trying to free Ben Weston, (Robert Scott Wilson) Abigail DiMera (Kate Mansi) is trying to find the truth of who really pushed her mother, Jennifer Deveraux (Melissa Reeves) over the balcony of The Bistro, and so it makes perfect sense that Roman and Kate might be trying to find out who was really responsible for Adrienne’s death, because for Will to be in prison for it, obviously someone didn’t consider her death an accident, even if Will does blame himself!

Days of Our Lives Spoilers: Freddie Smith Talks Sonny/Evan Kiss – Is It Love or Just a Fill-in for Will Horton? @celebratesoaps #days #DOOL #daysofourlives https://t.co/PRAcuZffrZ

People don’t get stuck in prison for committing accidents; Will blames himself for Adrienne’s death, but maybe there is more to what happened than Will’s part of it. Justin Kiriakis (Wally Kurth) is a defense attorney, and maybe he had a disgruntled client that killed Adrienne and made it look like an accident, and Will was only involved by virtue of being in the wrong place at the wrong time, and blames himself. Kate and Roman might be working together “undercover” combining their ears and eyes to find out the other part of the story!