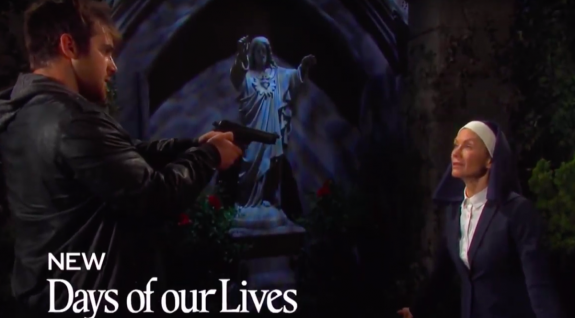 Days of Our Lives (DOOL) spoilers for Monday, December 9, tease that Lani Price (Sal Stowers) will face a crushing blow. She was shocked when Eli Grant (Lamon Archey) showed up at the convent, so she’s obviously going to wonder what in the world he’s doing there. DOOL fans know Gabi Hernandez (Camila Banus) sent Eli to Rome on a mission, so Eli will admit he works for Gabi now. He’ll also take great pleasure in informing Lani that he’s sleeping with her rival.

Days of Our Lives Spoilers: “Hope” Offers Resistance When Abigail Asks To Look Into Jennifer’s Case

Eli was hurt deeply by Lani’s decision to dump him at the altar, so he’ll want Lani to feel some pain, too. He’ll be happy on some level when he sees the devastation in Lani’s eyes. Eli’s just too bitter right now to care if Lani suffers. Of course, JJ Deveraux (Casey Moss) is the truly bitter one – and he’s just tracked down Kristen DiMera (Stacy Haiduk) outside.

Days of Our Lives spoilers say JJ will keep pointing that gun at Kristen and fly into a rage. He’ll spell out all the reasons why Kristen deserves to die for killing Haley Chen (Thia Megia). Kristen probably won’t beg for her own life. She’s been struggling to forgive herself for her mistakes, so she may suggest she understands. Kristen will likely let JJ do whatever he has to do to find peace.

Fortunately, Lani will find JJ before he can pull the trigger. Days of Our Lives spoilers say Lani will step up for Kristen’s sake and hope she can save her life. While Lani tries to talk JJ out of murdering Kristen, Abigail DiMera (Kate Mansi) will take Jennifer Horton (Melissa Reeves) back to the scene of the crime. She’ll want to see if she can shake some memories loose about the night Jennifer was shoved.

Days Of Our Lives Spoilers: Jennifer Horton Will Have A Memory Flash

Days spoilers state that Jennifer will indeed have a new memory flash, but it won’t be enough to put “Princess Gina Von Amberg” aka Hope Brady (Kristian Alfonso) away. However, Abigail could get a bit closer to figuring out the truth. That’s the part that’ll make “Princess Gina” nervous as this storyline heats up.

Over with Chad DiMera (Billy Flynn), he’ll confide in Kate Roberts (Lauren Koslow). Chad will admit he’s been in touch with “Stefano DiMera,” but we know Chad’s actually been talking to memory-manipulated Steve Johnson (Stephen Nichols). As for Kate, she’ll probably have some advice for Chad like she always does.

It looks like another fantastic episode’s coming up. We’ll give you updates as other Days news and rumors emerge. Stay tuned to DOOL and don’t forget to check back often for the latest Days of Our Lives spoilers, rumors, updates and news.