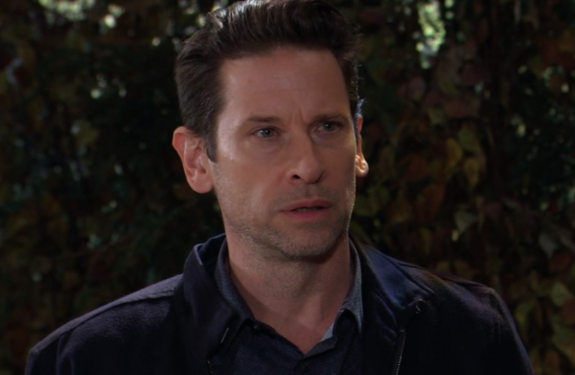 Jason made a crucial mistake with Shiloh Archer (Coby Ryan McLaughlin). Jason isn’t taking chances anymore. Griffin Monroe (Matt Cohen) arrives and meets Carly Corinthos (Laura Wright). Sonny speaks with Griffin before he looks at Lucas Jones (Ryan Carnes) scans. Sonny is surprised Carly didn’t tell him she called Griffin. Carly would have called Patrick Drake (formerly Jason Thompson) if Griffin has been unavailable. Griffin tells Carly he examined Lucas and his condition is serious. Lucas has brain function but they are at the wait and see stage. Griffin says Lucas is getting the best treatment available.

Carly goes to update Bobbie Spencer (Jackie Zeman). Sonny asks Griffin to look at Mike Corbin’s (Max Gail) lab results, Mike is slipping badly. Carly says Bobbie was relieved to hear Griffin’s assessment of Lucas. Sonny tells Carly he asked Griffin to look at Mike’s test result. Carly tells Sonny she thinks that is great. Griffin tells Sonny that Mike won’t recognize him or the situation for much longer. Carly asks if the end is near, Griffin agrees it is. Sonny questions if there is anything that will buy him more time, money is not a problem. Griffin suggests a program in Sweden. Griffin will write a letter but he’s not sure he can get him in. Sonny will make it happen if Griffin can get him in.

General Hospital’s Harrison Chase (Josh Swickard) wants to talk to Willow Tait (Katelyn MacMullen). Chase needs to know what is bothering her. Willow doesn’t know if it would have been a problem but they need to find out. Willow tells Chase she thought she might be pregnant. Chase wonders why Willow didn’t tell him. Willow says they never discussed kids. Willow thinks its time they figure out how they feel about kids. Chase overs to go first. Chase was both relieved and disappointed to find out Willow wasn’t pregnant.

Chase wants kids someday but they aren’t ready yet. Chase hopes it accidentally happens in a way so they wouldn’t have to choose. Willow says it would have been a happy accident. Willow realizes now that she wants to be a mom. Willow says part of this is her missing Wiley Cooper-Jones (Theo and Erik Olson). Chase would like to have kids with Willow. Chase thinks they need to be more settled in their lives first. Chase and Willow start to make love.

General Hospital’s General Hospital’s Franco Baldwin (Roger Howarth) is working on the treehouse at the Quartermaine mansion. Franco explains this is the last few hours he has to help with it. Franco explains this is the last thing he can do for Drew Cain (Billy Miller) as Drew. Ned Ashton (Wally Kurth) excuses himself to take a phone call. Ned wonders if his ex-wife knows what is going on with their daughter. Jason arrives with a list of names and needs Ned’s help. Jason wants to know if Ned thinks these men will be fair to Sam today. Ned thinks they will be fair but can’t make any guarantees.

Ned suggests Jason help Franco with the treehouse. Franco thanks Jason for standing up for him in court. Jason can’t stand Franco but his son loves him and that’s just how it is. Jason promises to finish the treehouse, Franco thanks him and leaves. Jason adds the door to the treehouse. Monica and Jason discuss her losing Drew again. Monica says Drew reminds her a lot of Jason. Monica is going to miss Drew. Jason comforts Monica.

General Hospital’s Monica Quartermaine (Leslie Charleston) explains to Brook Lynn Ashton (Amanda Setton) why she got rid of the Thanksgiving dinner. Olivia Quartermaine (Lisa LoCicero) starts to confront Monica when Brook Lynn confesses to ruining dinner. Brook that she missed having a traditional Quartermaine Thanksgiving. Monica asks Brook Lynn what this is going to cost her. Monica tells Brook Lynn how much she is like her grandmother. Ned overhears Brook telling someone to stop harassing her. Ned wants to help but Brook refuses to let him. Olivia comes in and tells them about Lucas’ accident, Brook rushes to the hospital. Ned loves his daughter but she’s hiding something big.

General Hospital’s Hamilton Finn (Michael Easton) shows up at the hospital with Violet Barnes (Jophielle Love). Liz Baldwin (Rebecca Herbst) is on the phone with Franco Baldwin (Roger Howarth). Finn asks if that was Hayden Barnes (Rebecca Budig), she says no. Liz promises to tell Finn if she hears from Hayden. Finn doesn’t want to mess this up. Liz tells Finn he’s got this, Hayden trusts him. Franco arrives at the hospital for his procedure.

General Hospital’s Robert Scorpio (Tristan Rogers) meets with Anna Devane (Finola Hughes). Robert was never sold on Anna and Finn but he understands. Robert doesn’t feel the same about Peter August (Wes Ramsey). Robert wants Anna to listen to her instincts about Peter. Anna tells Robert he doesn’t run her life. Anna doesn’t want Robert to push her on Peter. Robert tells Anna to stop avoiding what is right in front of her face. Finn and Violet join Anna and Robert. Robert takes Violet for a treat. Finn watches Violet saying she’s having the time of their life. Finn joins Robert and Violet at the bar, she’s having a milkshake.

General Hospital’s Peter calls someone demanding Franco’s procedure be stopped at all costs. Maxie Jones (Kirsten Storms) speaks to her son about Peter. Maxie says she loves Peter with all her heart. Peter arrives and Maxie tells him he doesn’t have to knock anymore. Peter goes to speak to Liz asking questions about Franco’s procedure. Lulu Spencer (Emme Rylan) arrives at Maxie’s with a gift. Lulu tells Maxie that Brook is back in town. Lulu tells Maxie about the argument with Brook.

Lulu is afraid Brook will cause her problems with Olivia. Felicia Scorpio (Kristina Wagner) calls Maxie and tells her about Lucas’ accident. Maxie tells Lulu what is going on. Liz rejoins Peter in the meantime. Liz says if Franco doesn’t come back she’s going to have to find a way to let him go. Lulu and Maxie arrive at the hospital and argue with Brook. Peter orders Franco and Andre Maddox (Anthony Montgomery) killed.