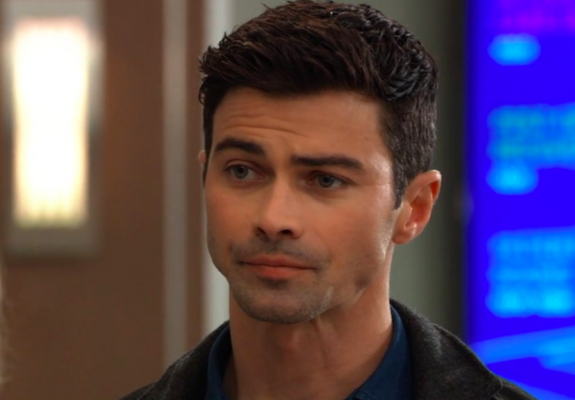 General Hospital (GH) spoilers for Monday, December 9, tease that Anna Devane (Finola Hughes) will wonder what Peter August (Wes Ramsey) is up to. She just walked up as Peter was finishing a disturbing conversation. Peter told his lackey to eliminate Andre Maddox (Anthony Montgomery), Franco Baldwin (Roger Howarth) or both. All Peter cares about is making sure this memory procedure never happens.

GH Spoilers: Anna Devane Will Wonder What Peter August Is Up To

Peter will be relieved to know Anna didn’t hear his murder plot details, but he’ll still have a fire to put out. Anna will realize Peter’s got something on his mind, so she should a sympathetic ear. Of course, Peter can’t spill the truth to Anna, so he’ll have to provide a phony excuse instead. Peter will lie to cover is tracks, but it looks like Anna’s spidey senses will keep tingling. She’ll probably feel like Peter’s still keeping a few secrets.

Speaking of secrets, Nina Reeves (Cynthia Watros) will have to decide what she’s willing to share with Valentin Cassadine (James Patrick Stuart). She reunited with Valentin in hopes of destroying him, but part of her loves her family and wants to keep it intact. Even so, Nina seemed to take a turn toward revenge against after she found that Cassadine ring. She intends to team up with Ava Jerome (Maura West) and stop the Cassadine men’s mind games.

General Hospital News: Tamara Braun Talks About Her Controversial Exit And What’s Ahead

General Hospital Spoilers: Nina Reeves Will Leave Valentin Cassadine Out Of The Loop

As a result, it looks like Nina will leave Valentin out of the loop on her discovery. When Valentin asks how things went with Ava, Nina probably won’t mention the ring or the fact that Nikolas Cassadine (Marcus Coloma) could be alive. General Hospital spoilers say Valentin will battle some suspicions on Monday, so he may worry that Nina’s holding out on him. He might shake off his concerns, but he should know something’s up.

Over with Jasper “Jax” Jacks (Ingo Rademacher), he’ll have another tense faceoff with Nik. Jax will gripe about Nikolas’ reckless actions and suggest Nik should go knock on Valentin’s door. He’ll be fed up enough to pass his problem along the enemy, which could be important if Nina comes around. Nina will consider another secret partnership on Monday. She might contemplate telling Jax what she suspects about Nikolas. Nina may think if they work together, they can sink both Valentin and Nik.

As for Ava, she’ll be out of Shadybrook and back at the gallery. Ava should be able to think clearly for the first time in a while – and she’ll likely have revenge on her mind thanks to Nina’s idea. However, that’ll have to wait since Dr. Griffin Munro (Matt Cohen) will show up for a chat. Ava faces a shocker in Monday’s preview video, so perhaps Griffin’s appearance will be the reason her jaw’s dropping.

GH Spoilers: Dr. Griffin Munro Will Show Up For A Chat

Griffin certainly someone Ava expected to see back in town, so she’ll wonder why he’s in Port Charles. General Hospital spoilers say Griffin will bring Ava up to speed on Lucas Jones (Ryan Carnes), so she should fret about how Julian Jerome’s (William deVry) handling all this. What Ava won’t realize is that Julian’s to blame for the crash!

At GH, “Drew Cain” will speak with Elizabeth Baldwin (Rebecca Herbst) before the memory procedure. They’ll probably go over the risks and possible outcomes again, but they’ll both be on board with taking this chance. Liz will talk about wanting her Franco back, so “Drew” will hope he can grant Liz’s wish.