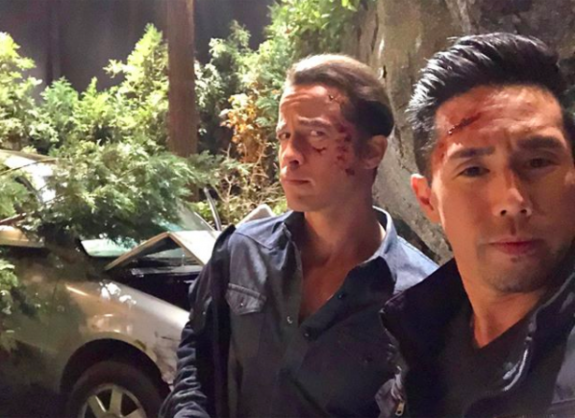 General Hospital spoilers previously hinted that fans could have been saying goodbye to Parry Shen, who plays Brad Cooper. It even appeared that the actor confirmed it on his official Facebook page. However, he is now backtracking and claiming it was just a joke. Fans are reacting to the GH star explaining why he made the comment he did after a speculation blog post suggested he could be on his way out.

GH spoilers teased that the future was murky for Brad, especially with the teaser that he would become involved in a car accident. That scene aired earlier this week on the ABC soap. However, Brad is going to be just fine. This prompted one blog to speculate that he could be on his way out, which prompted a strong reaction from fans.

On Parry’s Facebook page, he posted a link to the blog and seemed to give a “gracious goodbye” comment. Even though some predicted he was teasing, most thought he was serious. However, it turns out it was just a joke. Since then, he has deleted the post.

General Hospital spoilers reveal that on Twitter, Parry confirmed his status on the soap opera. He explained that for four days, he was not allowed to say anything about the future of his character. So, he made a joke thinking that everyone would get the reference. Even though some fans did recognize it as a joke, most did not.

Most viewers were very forgiving and some even used humor to assure the actor that there were no hard feelings. However, there are some that were not happy that he mislead fans. On Facebook, one person wrote,

“…he’s moving on to prime time so just makes sense to me but time shall tell. To come out and joke about that was just dumb in my opinion…”

Instead of making a joke, which most viewers didn’t get according to multiple GH message boards, forums and social media, the actor could have just not said anything.

One good response that a lot of actors use is, “you’ll just have to keep watching to find out!” Maybe this is a lesson for the soap star on how to handle something like this in the future.