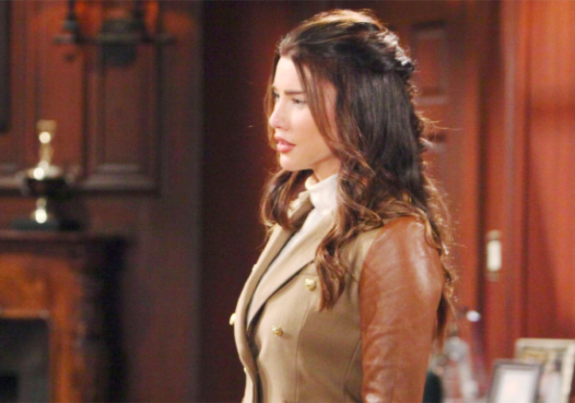 The Bold and the Beautiful spoilers for Monday, December 9, tease that Steffy Forrester (Jacqueline MacInnes Wood) will have some tough questions for her brother Thomas Forrester (Matthew Atkinson). As B&B viewers know, Steffy just learned that Thomas and Douglas Forrester (Henry Joseph Samiri) made an all-out effort to get Hope Logan (Annika Noelle) to come back to Forrester Creations and resurrect the Hope For The Future line.

According to B&B spoilers, Steffy will question Thomas about what he’s up to, and about why he’s using Douglas to try to manipulate hope into returning to Forrester Creations. Steffy thinks that Thomas should just mind his own business and let Hope and Liam Spencer (Scott Clifton) enjoy their life together with Beth Spencer (River Davidson and Madeline Valdez).

B&B Spoilers: Steffy Forrester Has Harsh Words For Her Brother

Steffy will tell Thomas in no uncertain terms to stay away from Hope, but B&B spoilers indicate that Thomas will end up giving as good as he gets during their argument. He’ll probably try to tell Steffy that she’ll benefit from his plan, too, if things work out the way that he wants. Of course, Thomas’ end game is to be with Hope while Steffy is with Liam. But Steffy won’t be on board with this plan, and she’ll let her brother know it.

Meanwhile, on Monday’s new episode of B&B, Brooke Forrester (Katherine Kelly Lang) will seriously disappoint Ridge Forrester (Thorsten Kaye). As B&B viewers know, Ridge has just made a last-ditch effort to save his marriage to Brooke. He told Brooke that their marriage is worth saving, and that he’s willing to put in the hard work and effort to make it work.

Of course, what Ridge really wants is for Brooke to forgive Thomas so that they can move forward together in their marriage. Ridge said that he was willing to forgive Brooke for withholding Thomas’ “death” from him, and that he just wants to put these terrible past few weeks behind them and move forward in the spirit of love and forgiveness.

The Bold And The Beautiful Spoilers: Brooke Makes Final Call On ‘Bridge’ Marriage – What Will She Decide? https://t.co/xn8S2NQIHS pic.twitter.com/YciWkUGFfa

Unfortunately, B&B spoilers say that Brooke will outright reject Ridge’s request, and that she will be unwilling to forgive Thomas for his actions. As B&B viewers know, she’s still outraged that Thomas didn’t tell Hope that Beth was alive right away, and she’s incensed that he manipulated her into marrying him. It appears that Brooke will tell Ridge that she just can’t forgive Thomas.

The Bold and the Beautiful spoilers also say that Brooke will have some terms of her own, and that she’ll tell him exactly what it will take for them to reunite. Exactly what she demands remains to be seen, but it will probably involve Ridge disowning Thomas or admitting that Thomas is irredeemable. At any rate, it’s going to be something that Ridge will not do.

B&B spoilers say that Brooke and Ridge will indeed sign the divorce papers, and their marriage will be over. They simply won’t be able to come to terms that are agreeable for each other, and so they’ll decide to walk away from the marriage.