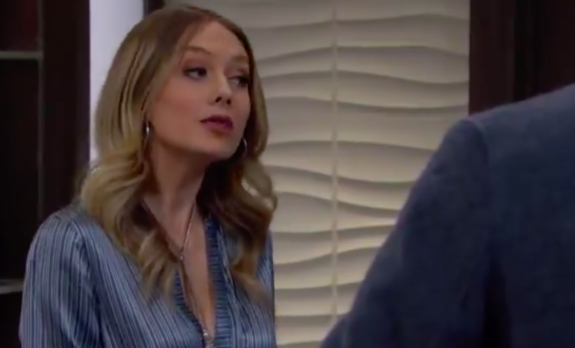 The Young and the Restless spoilers for Monday, December 9, tease that Mariah Copeland (Camryn Grimes) will find Summer Newman (Hunter King) at Jabot as she’s looking for Kyle Abbott (Michael Mealor). Mariah and Summer will bicker, and through their conversation Mariah will learn that Summer and Theo Vanderway (Tyler Johnson) broke up. Mariah will then express concern for Kyle now that Summer is single.

Summer will be insulted by this and will insist that Mariah is also insulting Kyle with her implications. Mariah will then accuse Summer of using Theo to make Kyle feel jealous, and Summer will promptly remind Mariah that she has feelings and isn’t living her life for Mariah’s entertainment.

Y&R Spoilers: Abby Newman Has A Proposition For Chance Chancellor

Next on Y&R, at The Grand Phoenix, Chance Chancellor (Donny Boaz) will learn from Abby Newman (Melissa Ordway) that the jewels spilling out of her bag are fake and that the jewel thefts were a sham to get rid of Phyllis Summers (Michelle Stafford). She even hired actors to play the victims. She and Chance will flirt as they talk about her sham, and he’ll reveal that he saw through her from the start. Ultimately, she’ll ask him to be head of security for the hotel, and he’ll say that he’ll think about it.

Meanwhile, Devon Hamilton (Bryton James) will talk with Amanda Sinclair (Mishael Morgan) at Society. She’ll snap shut her laptop as he approaches, and they’ll bicker about her possible involvement in the will scam. She’ll threaten to file a restraining order against him before asking him to leave. Elena Dawson (Brytni Sarpy) will have been watching the whole scene, and Devon will take off after her once he notices.

Next on Y&R, Phyllis will arrive and talk to Amanda about her wrongful termination from The Grand Phoenix. She’ll want Amanda to represent her, but Amanda will be skeptical about taking the case – it could take years and she doesn’t want another high-profile case. She’ll remark that Phyllis creates trouble, which will irk Phyllis and she’ll leave. Amanda will then call someone and say that she’s worried that “he” may have found the tracker and destroyed it.

At Crimson Lights, Devon will talk with Elena, who will be upset because she thought he was going to be at work when she saw him with Amanda. They’ll argue, and Devon won’t understand her thinking he should just get over his money being gone. She’ll relay that Nate Hastings (Sean Dominic) made her realize that she was being too hard on Amanda, and she’ll ask Devon if he’s attracted to her. Devon will say no.

Devon will then suggest that Elena may want out of their relationship, and Elena will fire back that he’s the one pulling back, not her. She’ll say that he needs to decide whether he really wants her, or whether he wants to stay locked in anger. Later, Devon will talk with Mariah who will agree with him about Amanda but will tell him to go tell Elena how much she means to him.

The Young And The Restless Spoilers: Devon Hides A Secret- Will It Cause Tension With Elena? https://t.co/cN8iYIDpKs pic.twitter.com/M1I6wwvWLg

Next on Y&R, Phyllis will talk with Summer at Jabot. Phyllis will want some support after having been turned away by Amanda, and Summer will hear the details. Summer will attempt to joke, but Phyllis will be really upset, which Summer will notice. Phyllis will remark that not everyone is born an Abbott or a Newman, and that she’s just playing the cards she’s been dealt.

Finally, on Monday’s new episode of Y&R, Amanda will see that the tracker is back on and will be relieved.