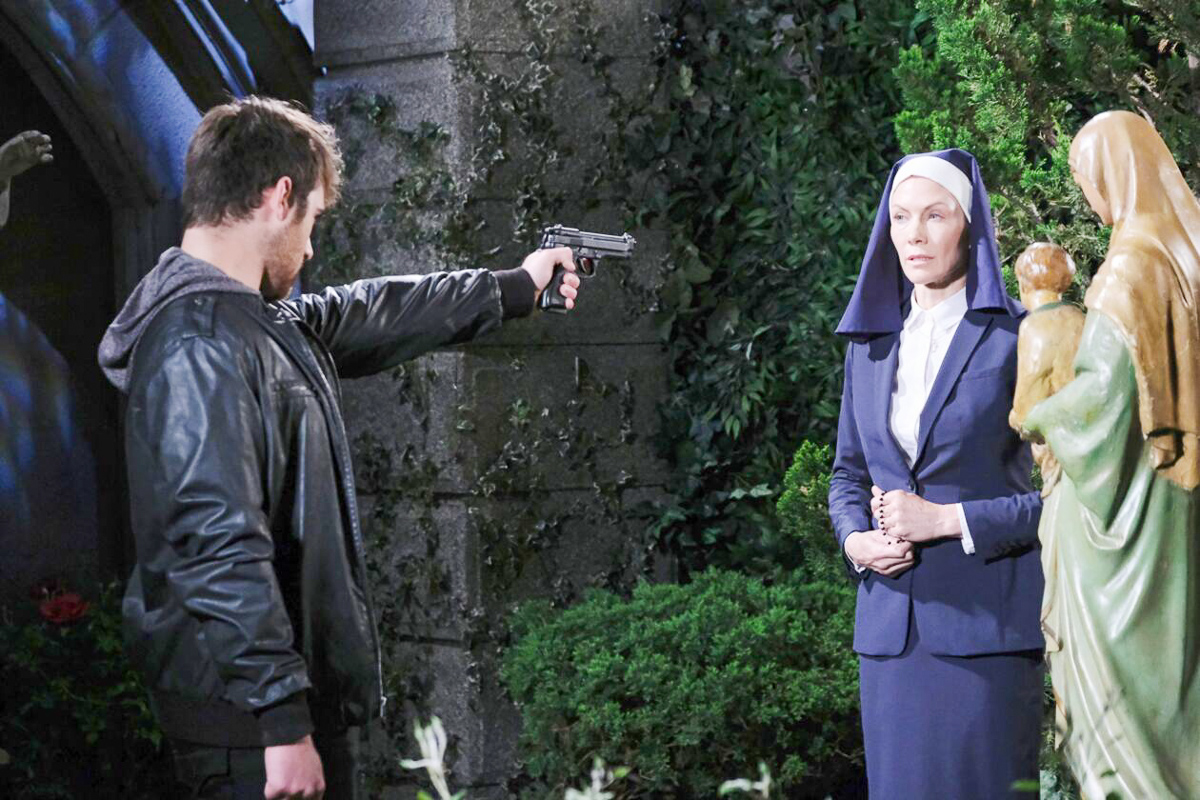 Abigail DiMera (Kate Mansi) continues to make progress on her mother, Jennifer Deveraux’s (Melissa Reeves) case. As Days of Our Lives viewers will recall, Jennifer was pushed over the balcony railing at “The Bistro” where she and Jack Deveraux (Matthew Ashford) and Justin and Adrienne Kiriakis (Wally Kurth, Judi Evans) were going to have their double wedding reception after Eli Grant (Lamon Archey) and Lani Price (Sal Stowers) said they could use the already set up venue after Lani dumped Eli at the altar.

Abigail brings Jennifer back to the scene of the crime to jog her memory, then questions “Hope Brady” (Kristian Alfonso) about the night Jennifer was pushed, not realizing that “Hope” has been turned into Princess Gina Von Amberg for over a year now! “Hope” is tempted to eliminate Abigail after all the questions, and then Abigail’s husband Chad DiMera (Billy Flynn) joins in the investigation. “Hope” starts getting nervous and makes plans to skip town! At the end of the week, Jennifer will finally be released from the hospital and Jack Deveraux (Matthew Ashford) and she will find a little time for romance!

Eric Brady (Greg Vaughan) and Sarah Horton (Linsey Godfrey) receive terrible news about their daughter, baby Mackenzie “Mickey” Horton (the May twins).She started spiking a high fever and became lethargic, and now the tests have come back that Dr. Kayla Brady (Mary Beth Evans) ran on her and showed the baby has cancer – neuroblastoma, a serious condition where immature cells grow abnormally and attached themselves to the adrenal glands. Nicole Walker (Arianne Zucker) reaches out to Eric when she hears the terrible news, and tries to comfort him. They ultimately make a big decision to take the baby to a specialist in Boston and head out there with her.

Ciara Brady (Victoria Konefal) continues to seek evidence to help exonerate Ben Weston (Robert Scott Wilson), especially when he tells her that his legal situation has gotten worse! She will continue to try and find proof that her grandfather, Victor Kiriakis (John Aniston) and Xander Kiriakis (Paul Telfer) conspired to kill Ben’s sister, Jordan Ridgeway (Chrishell Stause) and frame Ben for it.

However, Xander becomes suspicious of Ciara when he keeps noticing her in his office at work when she shouldn’t be there, and perhaps he cannot get into his lockbox anymore since she drilled it open, found nothing she could use, and then replaced it with a new identical one but perhaps didn’t take into account that it may have a different key then Xander had for his original one! There was nothing to indicate that she replaced the key, perhaps while still on his key ring!

JJ Deveraux (Casey Moss) has stowed away in the DiMera jet that Eli used to go to Rome looking for Kristen DiMera (Stacy Haiduk) and stole his gun out of his suitcase in his motel room, then found her as she was praying out in the convent garden! A deranged JJ shouts at Kristen that she killed his girlfriend and he was sending her straight to hell, as he holds the gun on her and prepares to shoot!

After sending Eli to Rome to track down Kristen, with the intention to try and convince her to return her stock to DiMera instead of donating it to the Catholic Church, Gabi continues to fight against Chad. She tries, likely unsuccessfully to throw him and Abby out of the DiMera mansion, since later in the week he helps her investigate Jennifer’s case. Little does Gabi know that she’s not just fighting against Chad, she’s fighting against his father who is still alive in Steve Johnson’s (Stephen Nichols) body!

That’s it for this week’s Five Key Takeaways from Days of Our Lives. Stay tuned to the show, and check Days of Our Lives spoilers frequently for all the latest news, updates and developments!