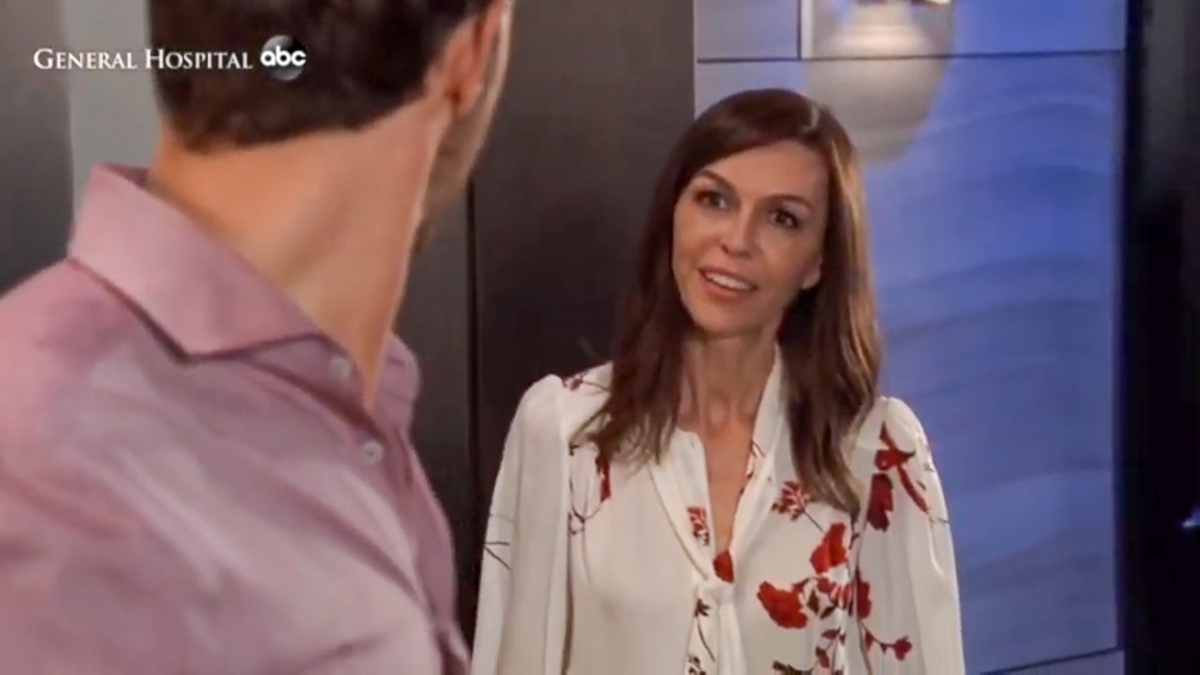 Franco “Frankendrew” Baldwin (Roger Howarth) gets ready to get his life back this week on GH, as Elizabeth Baldwin (Rebecca Herbst) attempts to express her gratitude to his Drew Cain (Billy Miller) persona before Dr. Andre Maddox (Anthony Montgomery) attempts the procedure that will hopefully extract Drew’s memories and personality from Franco’s brain, leaving Franco’s own. Andre is thinking since Franco’s were not extracted before Drew’s were transferred, as Drew’s had been before Jason Morgan’s (Steve Burton) were transferred to him, that Franco’s may merely be overlaid by Drew’s. Elizabeth will continue to have some questions.

GH Spoilers – Anna Devane Suspects Peter August Is Up To Something

Anna Devane (Finola Hughes) suspects that her son, Peter August (Wes Ramsey) is up to something. General Hospital viewers will recall that she walked up behind Peter in a hallway at GH, and nearly overheard him putting a hit out on Franco and Andre to keep the memory transfer reversal procedure from happening! She will chat him up a bit and tell him her mother’s intuition knows there’s something on his mind, and mention that it’s a good thing he didn’t decide to become a spy, since he is too easy to read!

She will become unsettled as she thinks about his responses and defensive postures and realizes he has something to hide. His mother is not the only one he needs to worry about, however; Mayor Laura Collins (Genie Francis) will sabotage Peter this week!

Valentin Cassadine (James Patrick Stuart) and Nikolas Cassadine (Marcus Coloma) will have all kinds of problems this week as Ava Jerome (Maura West) and Nina Reeves (Cynthia Watros) band together and plot to take down the Cassadine men, tired of all their lies! Valentin will suspect things aren’t as they seem as he asks Nina, who looks worried, if she had any better luck getting information out of Ava about the portrait of Helena Cassadine (Constance Towers), which either has information about the codicil to Mikkos Cassadine’s (John Colicos) will that would disinherit Valentin painted into it or a document possibly behind the picture in the frame.

Nina considers a new business partner – maybe Ava – however, she will try to defend Valentin over something anyway. Ava will pique Carly Corinthos’ (Laura Wright) curiosity while Nikolas may be in the process of being evicted from Jasper Jacks’ (Ingo Rademacher) home. Even Charlotte Cassadine (Scarlett Fernandez) will be confrontational!

Newly arrived Brook Lynn Ashton (Amanda Setton), now adult daughter of Ned Quartermaine (Wally Kurth) and Lois Cerullo (Rena Sofer) has some problems she is obviously concerned might try to follow her to Port Charles. General Hospital viewers will recall Ned walked in on the tail end of her on the phone to the person, telling him or her to stop harassing her, and he asks her to tell him what’s going on but Olivia Quartermaine (Lisa LoCicero) arrived to tell them about Lucas Jones (Ryan Carnes) and Brook Lynn rushed out to check on him at GH. Ned called Lois to find out what is going on with Brook Lynn and why she came to Port Charles, while Lulu Spencer (Emme Rylan) and Olivia commiserate about her presence!

General Hospital Spoilers: Is Nikolas Really Nikolas or An Imposter? What You Need To Know! @celebratesoaps #GH #generalhospitalhttps://t.co/MbwoJL33WC

The aftermath of Lucas and Brad Cooper’s (Parry Shen) wreck continues, as Griffin Munro (Matt Cohen) pays Lucas a visit at GH, Julian Jerome (William DeVry) is remorseful over tampering with Brad’s car, and Carly is alarmed! Detective Harrison Chase (Josh Swickard) will make a discovery, while Michael Corinthos (Chad Duell) will accept the help that he needs as he continues to care for Wiley Cooper-Jones (Erik and Theodore Olson) while Brad and Lucas are in the hospital.

That’s all for this week’s Five Key Takeaways from General Hospital. Stay tuned to the show and keep checking General Hospital spoilers frequently for all the latest news, updates and developments!