Days Of Our Lives Spoiler: Chad Admits To Kate He’s Been In Touch With Stefano 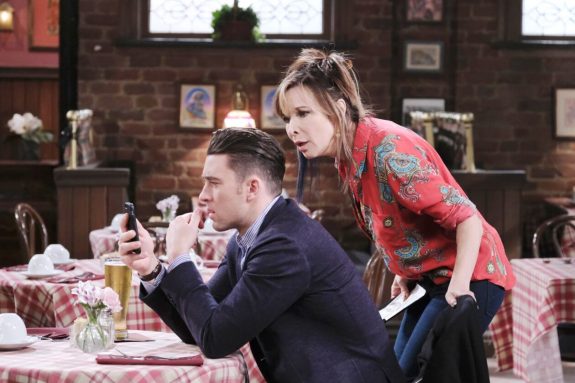 Days of Our Lives spoilers tease that Chad DiMera (Billy Flynn) will admit to Kate Roberts (Lauren Koslow) that he has been in touch with his father Stefano DiMera (Stephen Nichols) in an upcoming episode of Days of Our Lives!

DOOL Spoilers: Kate Roberts Makes The Discovery By Doing What She Does Best – Snooping!

In the Days of Our Lives photos for this week on NBC’s website, it shows Kate and Chad in Brady’s Pub, and Kate has her order pad in her hand, while Chad has his cell phone in his. Kate is looking over his shoulder at his cell phone, so close to him that he either sees her reflection in it or feels her breathing down his neck!

More than likely he is either reading his email on his phone or Stefano has sent him a text, and Kate brings up the subject of Stefano contacting Chad, so with her looking right at it he has no choice but to admit he’s been in contact with his father! Kate does look just a little bit shocked in that photo!

Days Of Our Lives Spoilers: How Much Will Chad DiMera Tell Kate Roberts?

How much will Chad tell Kate? Probably not a lot beyond what she saw and read for herself, if he had the email open or Stefano texted him. Kate, however, is one of Stefano’s ex-wives and so she may feel like she has the right to know if Chad has seen him, which of course the answer to is no!

He likely won’t have the patience to answer for Kate the same questions that his wife Abigail DiMera (Kate Mansi) had when she found out Stefano had made contact; namely, to prove he was really Stefano by meeting face to face – which, as Days of Our Lives viewers will recall, Dr. Wilhelm Rolf (William Utay) showed up instead!

DOOL Spoilers: The Phoenix Always Rises, But He Won’t Be Recognized – At Least Not As Himself!

The Phoenix always rises, but this time he won’t be recognized – at least not as himself! He lives in Steve Johnson’s body just like Princess Gina Von Amberg lives in Hope Brady’s (Kristian Alfonso)! The only way Stefano could come out in public is either to learn to act and talk like “Patch”, which Stefano would abhor, or if Rolf has made him a mask like he did for Kristen DiMera (Stacy Haiduk) when she was impersonating Nicole Walker (Arianne Zucker) so that Stefano can at least look like he has his own face! Stefano is definitely caught in a conundrum where going out in public is concerned!

Days Of Our Lives Spoilers: Kate Roberts Will Be Shocked That Stefano DiMera Is Still Alive

Kate will definitely be shocked that Stefano is even still alive – he would be 90 years old and he was in poor health back when she was with him! As Princess Gina noted when “Steffy” complained about Steve’s body, it is a newer, younger, healthier model with no diabetes, heart disease, or any of the other serious health problems that Stefano had the last time he was seen alive in Prague, that John Black (Drake Hogestyn) and Marlena Evans (Deidre Evans) had discussed. The problem will be how does Chad or anyone else Stefano communicates with via computer know he’s really Stefano?