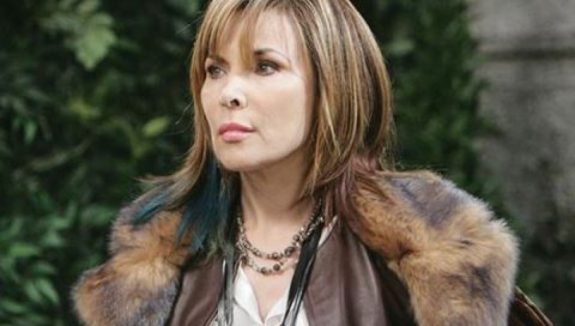 Days of Our Lives (DOOL) spoilers for Tuesday, December 10, tease that Kate Roberts (Lauren Koslow) will give “Stefano DiMera” aka Steve Johnson (Stephen Nichols) a warning. She’ll feel like “Stefano” needs to get a better grip on the situation with his son. Chad DiMera (Billy Flynn) filled Kate in on “Stefano’s” survival as well as Gabi Hernandez’s (Camila Banus) latest move to outmaneuver him. It wasn’t long until Kate dashed off to tattle on Chad for lying, so expect some tense moments on Tuesday.

Days Of Our Lives Spoiler: Chad Admits To Kate He’s Been In Touch With Stefano

DOOL Spoilers: “Stefano DiMera” Will Be Annoyed By Chad DiMera’s Failure And Deception

“Stefano” may be annoyed by Chad’s failure and deception about it, but Kate will likely lash out over “Stefano’s” secrets. Kate and “Stefano” are obviously working together, so she expects to be filled in on any important scheming developments. The fact that Kate had to hear about Chad’s derailed plot from Chad himself should annoy her.

While “Stefano” and Kate clash, Chad and Gabi Hernandez (Camila Banus) will have a showdown of their own. Days of Our Lives spoilers say they’ll argue until an exasperated Gabi throws Chad out of the DiMera mansion. She’ll insist that Chad should leave immediately, but he’ll ignore her orders. Chad will plan to stay put until he gets what he wants, which is control of the company.

Days Of Our Lives Spoilers: Abigail DiMera Will Have Some Questions For “Hope Brady”

Other Days spoilers state that Abigail DiMera (Kate Mansi) will have some questions for Hope Brady aka “Princess Gina” (Kristian Alfonso). She’ll dig for details on the mysterious flash drive, so “Princess Gina” should be more concerned than ever. As Abigail’s threat grows, “Princess Gina” will consider taking drastic action to get Abby out of the picture.

In Italy, Days of Our Lives spoilers say Lani Price (Sal Stowers) will beg for Kristen DiMera’s (Stacy Haiduk) life. She’ll urge JJ Deveraux (Casey Moss) to see that murder isn’t the answer. It won’t bring Haley Chen (Thia Megia) back and will just give JJ another burden to carry. Lani will do everything she can to convince JJ to put gun down and get some help.

Kristen’s life will indeed be spared, so JJ will begin the difficult road to healing and recovery soon. We’ll give you updates as other Days news and rumors emerge. Stick with DOOL and don’t forget to check back often for Days of Our Lives spoilers, rumors, updates and news.