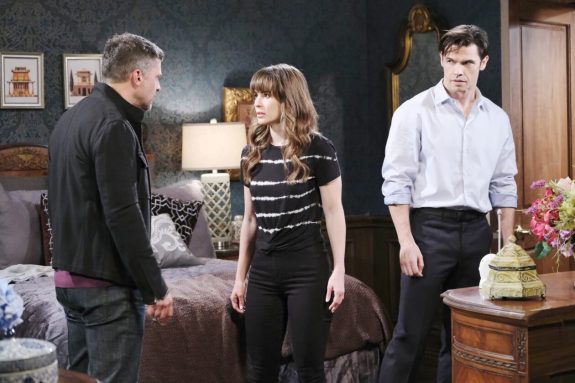 DOOL spoilers teased that Eric would agree to joint custody with Sarah under one condition. That Xander stay far away from baby Mickey. If Sarah refused, then he would take her to court and ask for full custody, using the paternity secret to secure a win from the judge.

The reformed villain was angry about it at first and even left to go deal with Eric. However, after thinking about it, he decided to let Eric have his way. He loves Sarah and Mickey so much that he can’t bear to be the cause of anymore pain for them. It was an act of true, selfless love, something that Xander has never shown anyone before.

Days of Our Lives spoilers reveal Maggie Horton Kiriakis (Suzanne Rogers) suggests that Sarah tell Xander about Mickey’s cancer diagnosis. She does exactly this, but Eric catches the two of them talking. He goes into a rage and verbally slams them both. Xander encourages him to put their differences aside for the child’s sake.However, Eric boldly refuses. This prompts Sarah to react and she basically gives Eric a piece of her mind. Not only was Xander the baby’s father figure for the first six months, but he is her support system.

For months now, we have seen Eric become a very angry man. Now he is issuing ultimatums and trying to get revenge. He isn’t even thinking of what is best for baby Mickey. It’s all about what he wants. It appears that while Xander is showing true and selfless love, Eric is doing just the opposite and becoming a big overgrown bully. Only time will tell how Sarah will reign him in before he goes completely off the rails.