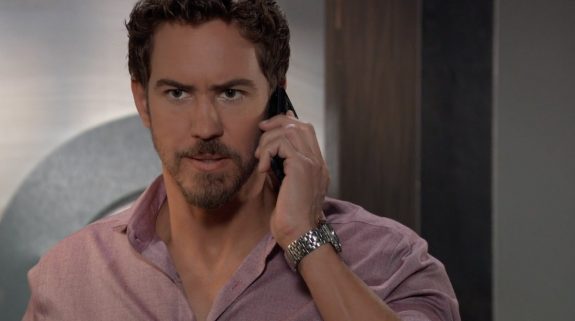 General Hospital (GH) spoilers for Tuesday, December 10, tease that Cameron Webber (William Lipton), Elizabeth Baldwin (Rebecca Herbst), and Scott Baldwin (Kin Shriner) will nervously await the outcome of a crucial procedure. “Drew Cain” aka Franco Baldwin (Roger Howarth) has made peace with however this turns out, but he’s obviously hoping for the best. The same goes for Liz and Scott, who’ll probably reassure a worried Cam on Tuesday. They’ll may try to trust that whatever happens, they’ll all be OK.

GH Spoilers: Maxie Jones Will Catch Up With Griffin Munro

Over with Maxie Jones (Kirsten Storms), she’ll take a moment to catch up with Griffin Munro (Matt Cohen). Maxie will admit that as of today, she’s “officially living in sin” with Peter August (Wes Ramsey). She’ll gush about what a great guy Peter is and how far they’ve come as a couple. Maxie will be excited about living together, so Griffin may suggest he’s happy for her.

Other General Hospital spoilers say Peter will make his way to GH. Before he gets very far, Laura Webber (Genie Francis) will cause another snag for him. She’ll refuse to get out of Peter’s path until they talk, so he’ll be stuck near the elevator while Laura makes her spiel.

Meanwhile, Peter’s hired gun will get ready to eliminate Franco, Andre Maddox (Anthony Montgomery) or both. The hitman will surprise Andre by bursting in the room where Franco’s procedure is just beginning. Fortunately, Peter’s minion won’t be able to pull off his goal. The procedure will move forward as planned, which is great news for Liz and her boys.

General Hospital Spoilers: Ava Jerome Will Have A Secret Partnership With Nina Reeves

Next, let’s talk about Ava Jerome’s (Maura West) secret partnership with Nina Reeves (Cynthia Watros). It looks like Ava will express doubt about Nina’s ability to commit. She may worry that once they get in too deep, Nina will make Valentin Cassadine (James Patrick Stuart) her priority as usual.

Ava’s interested in taking down the Cassadine men for their mind games, but she needs to know she can rely on Nina. General Hospital spoilers say Nina will assure Ava that she’s on her side. She’ll push Ava to give this alliance a real chance, so Ava will likely get on board.

That could bring serious trouble for Nikolas Cassadine (Marcus Coloma), but he’s already in plenty of it! Nik just realized he lost his ring, so he knows there’s a threat of exposure. Jasper “Jax” Jacks (Ingo Rademacher) is also demanding that Nikolas leave town – and now Valentin has shown up to seek Jax’s help. This day just couldn’t get much worse for Nik!

General Hospital spoilers state that Valentin will have a proposal for Jax. He’ll think they should pool their resources and achieve victory together, but that’s an awfully risky idea. There’s certainly the potential for double-crossing here, so Jax may be wary of even pretending to team up.

It sounds like another great episode’s ahead. We’ll give you updates as other GH details and rumors emerge. Stick with the ABC soap and don’t forget to check back often for the latest General Hospital spoilers, rumors, updates and news.