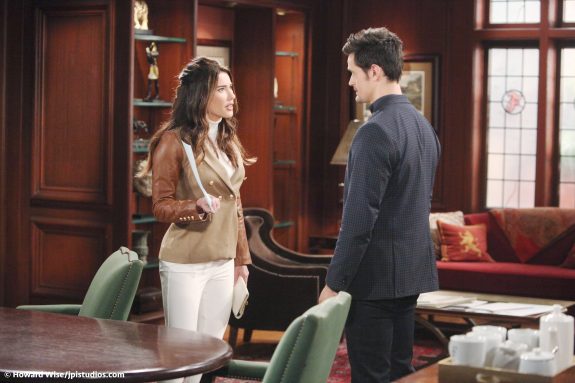 The Bold and the Beautiful spoilers for Tuesday, December 10, tease that the action is really heating up. But before we get to that, we have a quick programming note. The impeachment hearings preempted B&B on Monday, so the episode that would have aired then will now air on Tuesday, assuming there are no more interruptions. Here, we have a preview of what you can expect to see on Tuesday’s episode, assuming it airs as scheduled.

First off, Ridge Forrester (Thorsten Kaye) will brace himself for Brooke Forrester’s (Katherine Kelly Lang) response to his big pitch. As B&B viewers know, Ridge has just come to Brooke with the divorce papers in hand and asked her not to sign them, but to give Thomas Forrester (Matthew Atkinson) a chance in order to save their marriage.

What Ridge wants is for Brooke to forgive Thomas, since Thomas is really the only issue standing in their way at this point. Ridge decided that he was willing to forgive Brooke for withholding Thomas’ “death” from him, and that is willing to put in the work and the effort to make their marriage work, no matter what. But will Brooke be willing to put her anger aside, too?

The Bold and the Beautiful Spoilers: Shauna Professes Love To Ridge – His Response Will Surprise Her

B&B Spoilers: Brooke Forrester Makes Some Demands Of Her Own

Well, according to B&B spoilers, Brooke will tell Ridge in no uncertain terms that she’s not going to forgive Thomas for his actions. Of course, Brooke is still very upset with Thomas for not telling Hope that Beth Spencer (River Davidson and Madeline Valdez) was alive, and for manipulating her into a marriage. And Brooke will never forget Thomas’ indecent proposal to Hope.

In fact, the Bold and the Beautiful spoilers say that Brooke will give Ridge some terms of her own. She’ll tell him exactly what it will take for them to reunite, and that probably will involve Ridge turning his back on Thomas in some fashion. Whatever it is will be something that Ridge will absolutely refuse to do.

Bold And The Beautiful Spoilers: “Bridge” Sign The Divorce Papers

According to B&B spoilers, those divorce papers are going to get signed at some point, and they might even be signed right then and there when Brooke refuses to forgive Thomas. It looks like it will be the end of an era as the two aren’t able to find a way to save their marriage. It seems that it will be the end of the line for “Bridge,” at least for now.

Meanwhile, on Tuesday’s new episode of B&B, Thomas will get an earful from his sister Steffy Forrester (Jacqueline MacInnes Wood). As B&B viewers know, Steffy has just found out that Thomas asked Hope Logan (Annika Noelle) to return to Forrester Creations and work with him on Hope For The Future, with him as lead designer.

The Bold And The Beautiful Spoilers: Liam And Steffy Enlist Zoe To Help Find Out Thomas’ Plans https://t.co/Ng7QZA7gTo pic.twitter.com/VIIWrszEoM

B&B Spoilers: Steffy Forrester Lashes Out At Her Brother

The Bold and the Beautiful spoilers say that Steffy will demand answers from Thomas about what he’s doing, and she’ll blast him for trying to get close to Hope and for using Douglas Forrester (Henry Joseph Samiri) to do so. Steffy will tell Thomas that he needs to stay in his own lane and focus on co-parenting Douglas with Hope and nothing more.

However, it seems that Thomas will fire right back at Steffy and tell her to trust him, that he has a plan in place and everything under control. That will probably exasperate Steffy, who is already irritated with Thomas for signing over half of Douglas to Hope in the first place. Thomas will probably tell his sister not to worry, and that if his plan goes well, then he’ll be with Hope and Steffy can end up with Liam Spencer (Scott Clifton).

Of course, this won’t please Steffy at all, since (a) she’s not looking for a relationship with Liam, and (b) she doesn’t want Thomas with Hope. But Steffy will do her best to caution her brother and she may make demands about what he should and shouldn’t do, but it’s doubtful that Thomas will listen.