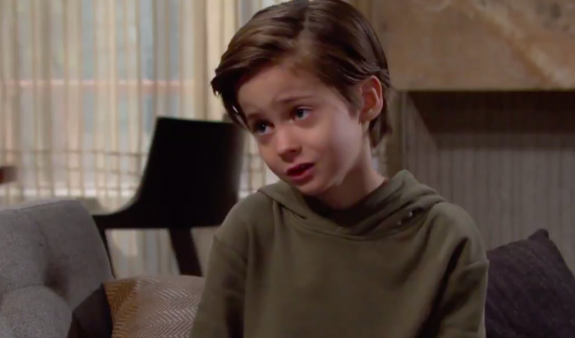 The Young and the Restless spoilers for Wednesday, December 11, tease that the action is really heating up on the CBS soap. Before we get to that, we have a programming note. Monday’s episode was preempted in the US due to the impeachment hearings, so the episode that was supposed to air on Monday will now push to Tuesday. And the episode that was scheduled for Tuesday will now air on Wednesday, and we’ve got the scoop about what will happen on that episode right here.

First off on Wednesday, Billy Abbott (Jason Thompson) and Victoria Newman (Amelia Heinle) will dine at Society. They’ll talk a bit about his job situation, and she’ll offer to put feelers out for a job for him, but he’d rather do it himself.

Victoria will then spring a surprise on Billy – they’re going on a trip on the Newman jet to Telluride on Christmas Eve. Billy will balk, saying he’d rather be in town for Christmas and leave afterwards. Victoria will have to work then, and she’ll sadly suggest that they table the discussion for the time being.

The Young and the Restless News: Ex-Wife Of Late Kristoff St. John Reveals All On Memoir

Next on Y&R, at Adam Newman’s (Mark Grossman) penthouse, Sharon Newman (Sharon Case) will arrive for another session with Connor Newman (Judah Mackey), who won’t like it one bit. Adam will go upstairs and Chelsea Lawson (Melissa Claire Egan) will go to see Nick Newman (Joshua Morrow), leaving Sharon and Connor alone.

Connor will proceed to question why Sharon is there and will tell her that he was having a good day until she showed up. He’ll act out some more, shoving some playing cards onto the floor, before Adam comes back into the room.

After Sharon leaves, Connor will tell Adam that he doesn’t like Sharon anymore and that she says mean things. He’ll then go on to say that Sharon threatened to have him sent away like she sent her daughter away and then warned that the monster was coming back and no one could stop it.

Next on Y&R, at the Newman Ranch, Nick will thank Victor Newman (Eric Braeden) and Nikki Newman (Melody Thomas Scott) for watching Christian Newman (Alex Wilson) so that he and Chelsea can spend some time with each other. Victor will wonder what Nick’s going to do with his life now that Chelsea has ruined his political career.

After Victor leaves the room, Nick and Nikki will talk about the situation with Chelsea. Nick will defend Chelsea and say that he knows how things look, but that he knows where things stand between the two of them. After Nick’s gone, Nikki and Victor will agree that Nick and Chelsea aren’t meant to be.

Young And The Restless Spoilers: Nick Newman Lashes Out At Chelsea Newman

Next on Y&R, Nick and Chelsea will head to Society for dinner, where they’ll find Victoria alone, with Billy having just left. They’ll sit at a table and Chelsea will update Nick on Connor’s issues and Nick will launch into how her “playing house” with Adam will just make things worse. They’ll argue, with Nick wondering how long Chelsea will stay at Adam’s and Chelsea insisting that she’s doing all this for Connor.

Chelsea will then get a text from Adam about Connor and leave, prompting Nick and Victoria to sit together. Victoria will tell Nick that Cheese is either with him or with Adam and she can’t have it both ways. Nick will point out that Billy isn’t with her, either, and she’ll worry about the effect that walking away from Jabot is having on him.

Y&R Spoilers: Billy Abbott Is Drawn Back To Old Habits

Next on Y&R, Billy will be at the little bar outside of Genoa City where he talked with Amanda Sinclair (Mishael Morgan) during the windstorm. Billy will be comfortable there – like he doesn’t have to be perfect or answer to anyone. He’ll tell himself that he doesn’t need the booze, just a little peace. He’ll text an apology to Victoria and will agree to go to Telluride over Christmas, but he’ll soon join in a poker game.

Meanwhile, Rey Rosales (Jordi Vilasuso) and Sharon will catch up at Crimson Lights. Sharon will open up about her concern over Connor, and Rey will encourage her. Soon, Adam will show up and announce to them that Connor is going down a darker road than they thought.

Adam will fill Rey and Sharon in on what Connor said about her, and that he knows Connor was making it up. Sharon will suggest that he and Chelsea tell Connor that they won’t tolerate manipulating or lying. After Adam leaves, Rey will support Sharon as she continues to worry about Connor.

The Young and The Restless Weekly Spoilers December 9 to December 13: Elena And Devon In Crisis Mode https://t.co/Hlc0QKWjc1 pic.twitter.com/Sy49mJepCO

Next on Y&R, back at the ranch, Nikki will tell Victor that Nick’s evening with Chelsea didn’t go well, and she’ll wonder if she should talk with Chelsea, but Victor will think it’s best not to interfere. Nick will arrive and tell Nikki that he knows what he has to do.

Young And The Restless Spoilers: Adam Newman & Chelsea Lawson Consider Their Next Move

Back at the penthouse, Adam will tell Chelsea about what’s gone on, and Chelsea will wonder if her moving in was the right things to do. She’ll point out that Connor might keep acting out so that she’ll stay there. But Adam will point out that Connor has only made progress when they’re together, and she’ll agree. Adam will say that they need to show him that he can’t manipulate like he tried to do with Sharon.

Finally, on Wednesday’s new episode of Y&R, Victoria will learn from Billy that he had a good workout, which will be a lie, since he was at the bar. She will offer to wash his back in the shower – an idea that he’ll love.