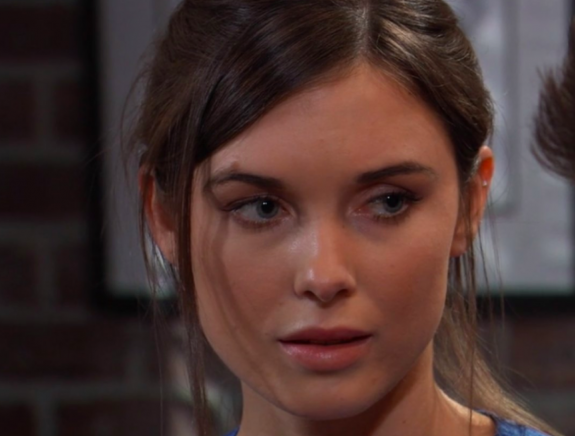 Julian inadvertently saved Alexis Davis’ (Nancy Lee Grahn) life in the process, but that provides little comfort since Lucas is in a coma and facing possible brain damage. On Wednesday, Julian will tell someone that this is all his fault. Perhaps he’ll open up to Ava Jerome (Maura West), who could provide a sympathetic ear for her brother. She certainly understands what it’s like to make mistakes you can’t take back.

Then again, perhaps Julian will speak with someone else and stop short of divulging the details. Regardless, it’s clear that Julian’s struggling under the weight of his remorse. Over with Michael Corinthos (Chad Duell), he’ll have a lot on his mind as well. Michael will definitely worry about “Wiley Cooper-Jones” (Erik and Theo Olson) potentially losing one of his dads.

Luckily, Josslyn Jacks (Eden McCoy) will be there to give Michael support. She’ll insist Lucas is going to fight for his life, so they have to trust that he’ll pull through. As for Sonny Corinthos (Maurice Benard), he’ll have Mike Corbin’s (Max Gail) inevitable fate on his mind. Carly Corinthos (Laura Wright) will sense that Sonny’s struggling to let go, but her attempt to help him will backfire – at least initially.

General Hospital Spoilers: Sonny Corinthos Will Not Sit And Watch His Father Die

Sonny will shout that he’s not going to sit around and watch his father die. Even if the study Griffin Munro (Matt Cohen) mentioned is a bust, Sonny will be determined to do something. It’s too hard for him to feel so powerless.

Speaking of feeling powerless, that’s exactly what Olivia Quartermaine (Lisa LoCicero) and Lulu Spencer (Emme Rylan) will discuss on Wednesday. Olivia will talk about Dante Falconeri (Dominic Zamprogna) and how she’d give anything to be able to help him. Lulu will be in agreement on that, but all they can do is hope that Dante finds his own way to healing one day.

General Hospital Spoilers: Franco Is Devastated When He Hears About Drew https://t.co/cCZ860cu8G pic.twitter.com/4AhYPgOFdC

Other General Hospital spoilers say Brook Lynn Ashton (Amanda Setton) will be on the hot seat. She’ll be pummeled with questions as Ned Quartermaine (Wally Kurth) tries to find out what kind of trouble she’s in. Ned will ask how things could go so wrong, so fast. He’ll feel like Brook Lynn isn’t giving him the whole story, so we’ll see how much he can pry out of her.

At Pentonville, Nelle Benson (Chloe Lanier) will meet with Martin Gray (Michael E. Knight) again and pressure him to get her released ASAP. Since Nelle’s stuck in a cell with Sam McCall (Kelly Monaco), that’s probably making her more impatient. Laura Webber (Genie Francis) mentioned that some prisoners are being released due to overcrowding, so Nelle may hope Martin can score her one of those releases.

Next, Willow Tait (Katelyn MacMullen) will be stunned when Harmony Miller (Inga Cadranel) tracks her down. It seems Harmony was indeed released early and wants to catch up with her daughter. They’ll end up discussing “Wiley” on Wednesday, but Willow will make her stance crystal clear. She’ll insist “Wiley” isn’t Harmony’s grandson, so she may shut down any notion that Harmony can get to know Brad and Lucas’ adopted kid.