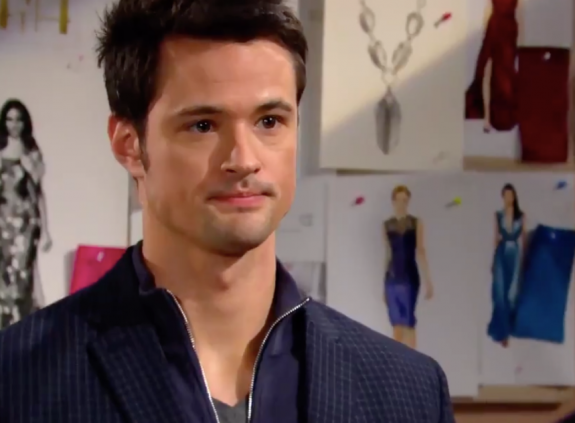 The Bold and the Beautiful spoilers for Wednesday, December 11, tease that Brooke Forrester (Katherine Kelly Lang) won’t have the answer that Ridge Forrester (Thorsten Kaye) wants to hear. As B&B viewers know, he’s just made a big pitch to Brooke, during which he asked her to forgive Thomas Forrester (Matthew Atkinson) in order to save their marriage. But Brooke refused to forgive Thomas, or even to consider forgiving him.

Further, Brooke told Ridge that he had to adopt her position on Thomas in order to save their marriage, and that’s something that Ridge just won’t do. According to B&B spoilers, Brooke and Ridge will sign the divorce papers. Whether they do that on or off-screen remains to be seen, but Ridge will sadly head back to the Forrester mansion, where he’ll encounter Shauna Fulton (Denise Richards).

According to B&B spoilers, Shauna will get the scoop from Ridge about what happened with Brooke, and since the news won’t be good, she’ll do her best to comfort him. But while a part of her will feel badly for Ridge, another part of her will feel like there’s hope. Shauna is in love with Ridge and wants nothing more than to embark on a relationship with him, but she didn’t want to push too hard while Ridge was still married to Brooke.

But now that Ridge and Brooke’s marriage will be over, Shauna might change her tactics. The Bold and the Beautiful spoilers say that she’ll end up making a stunning admission to Ridge on Wednesday’s episode. And since she’s already told Ridge that she loves him, her admission will likely be about something very different. She might tell Ridge that while she’s sorry for what he’s going through, she’s also happy that he’s a free man.

Whatever the case, it looks like Shauna won’t hold back and will make her feelings be known, all the while comforting Ridge while he tries to process his loss. Shauna really seems to want to embark on a relationship with Ridge, and now’s her chance.

The Bold And The Beautiful Spoilers: Liam And Steffy Enlist Zoe To Help Find Out Thomas’ Plans https://t.co/Ng7QZA7gTo pic.twitter.com/VIIWrszEoM

Meanwhile, on Wednesday’s new episode of B&B, Thomas will decide to entice Hope Logan (Annika Noelle) about coming to work at Forrester Creations. As B&B viewers know, Hope is considering coming back to Forrester in order to revitalize her Hope For The Future line. Thomas wants to be lead designer for the line and work closely with Hope, which is something she’s unsure about and mulling over.

It looks like Thomas will propose that Hope not only resurrect Hope For The Future, but that she embark on a fashion competition going head-to-head against Steffy Forrester (Jacqueline MacInnes Wood). As B&B know, Steffy recently mentioned on the show that she was working on her own line, and it looks like Thomas will try to pit the two lines against each other in a competition.

According to ongoing B&B spoilers, Steffy will eventually get Sally Spectra (Courtney Hope) on her line’s design team, and they’ll compete with Hope and Thomas. So, it seems that Hope will ultimately decide to come back to Forrester Creations and work with Thomas – something that’s probably not going to sit well with Liam Spencer (Scott Clifton) and will mean a lot of togetherness for Thomas and Hope.