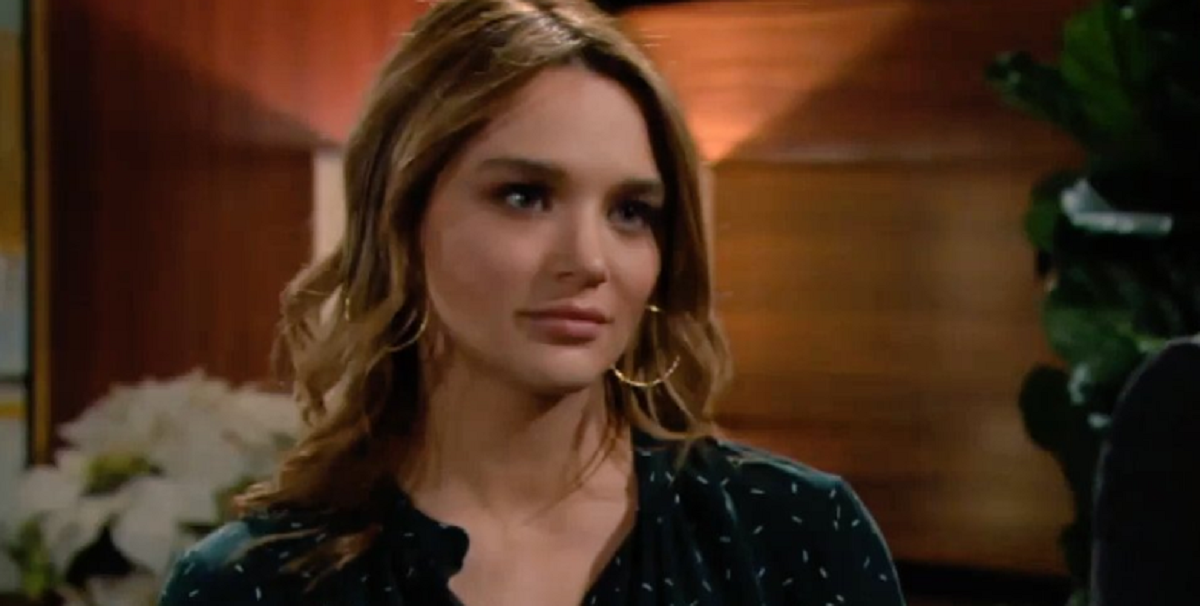 The Young and the Restless (Y&R) spoilers for Thursday, December 12, tease that Summer Newman (Hunter King) will find Theo Vanderway (Tyler Johnson) looking through papers in the CEO office. He’ll ultimately find some notes that Jack Abbott (Peter Bergman) left for him after Summer questions what he was doing. He’ll then wonder about Kyle Abbott’s (Michael Mealor) upcoming meeting with Jack, but Summer will play coy, noting that he’ll know what the meeting is about soon, depending on how it goes.

Meanwhile, at Devon Hamilton’s (Bryton James) penthouse, Devon will talk with Mariah Copeland (Camryn Grimes) and tell her that Elena Dawson (Brytni Sarpy) has now made peace with Amanda Sinclair (Mishael Morgan). Devon will say that Nate Hastings (Sean Dominic) was behind it, and he’ll update Mariah on how he wants Elena to give him time to figure out things on his own.

Next on Y&R, at Society, Kyle will ask Jack to reinstate him as CEO of Jabot and will go on to suggest that he and Jack share the position. Jack will balk a bit, and Kyle will say that if Jack won’t promote him, then perhaps it’s time that he moves on. Jack will be surprised but will ultimately say that they’ll try being co-CEOs.

Meanwhile, Mariah will find Lola Abbott (Sasha Calle) and tell her that Theo and Summer broke up, and that Lola should be careful of Summer because Kyle’s naive when it comes to her. Then, Lola will join Kyle for a celebration on his co-CEO position, and Theo will arrive. Lola and Theo will chat a bit later about Theo and Summer’s breakup and about what the future looks like for Lola.

Next on Y&R, Elena and Nate will talk at Crimson Lights. Elena will update Nate about her talk with Amanda and how they agreed to start fresh, which he’ll be happy about. Elena will say that she thinks that Devon’s issues with Amanda are actually about Hilary Hamilton (Mishael Morgan) and that he’s not over her. Nate will remind Elena that Devon loves her, and she’ll be sure that everything will be ok.

Young and the Restless #YR Spoilers: Amanda's On The Market – Is Nate The Man For Her? @celebratesoaps https://t.co/3ibUWaaAjK

Meanwhile, at the Newman Ranch, Victor Newman (Eric Braeden) will take a call about Amanda and he’ll note that the information he’s hearing is very interesting. Later, he’ll see Summer at Jabot, and they’ll chat about her promotion and her breakup with Theo. Victor will reveal that he had Theo investigated before and had some concerns, but he’ll say that the right person is out there. They’ll touch on his death ruse, and she’ll say that she’s trying to forgive.

Kyle and Summer will catch up later, and they’ll celebrate over champagne. Kyle will note that Summer inspired him by walking away from the opportunities that Victor offered her, and they’ll talk about Theo a bit as well. Summer will say that he went through papers on Jack’s desk. They’ll toast to Theo not being Summer’s boyfriend anymore.

Next on Y&R, Nate will visit Devon at the penthouse and express his concern for him. Nate will point out that Devon is feeling pain over Hilary and that Elena knows about it. Nate will suggest that Devon talk to a therapist as Devon relays that he flashes to being at Hilary’s side at the hospital when he looks in Amanda’s eyes. Devon will say that he’s going to stay away from Amanda.

Later, Victor will visit Devon with information about Amanda. He’ll say that there’s a reason that she has no digital footprint, and that’s that she hired a company to erase her history starting at the time that Colin Atkinson (Tristan Rogers) started his scheme. Victor will present Devon with a dossier on Amanda and promise to help get Colin and his accomplice, if it’s Amanda.

At home, Kyle will find Lola in robe, and she’ll have champagne to celebrate, but he’ll note that he already had some at the office with Summer. Lola will flash her lingerie and Kyle will say that it was a really good day.

Finally, on Thursday’s new episode of Y&R, Elena will meet up with Nate at Crimson Lights and he’ll tell her all about his talk with Devon earlier. The two will embrace.