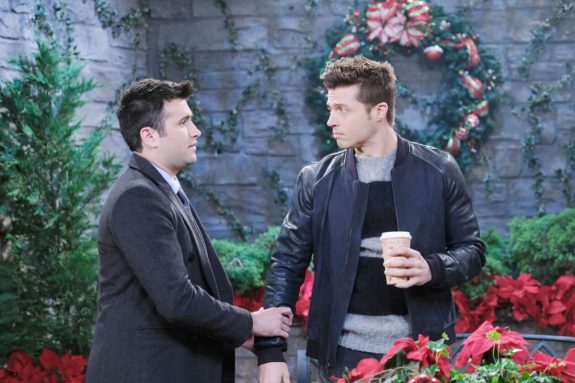 Days of Our Lives (DOOL) spoilers for Thursday, December 12, tease that Kate Roberts (Lauren Koslow) will blow her top. She’ll get updates on Sonny Kiriakis’ (Freddie Smith) kiss with Evan Frears (Brock Kelly) and immediately fly into a rage over the betrayal. Will Horton (Chandler Massey) is Kate’s grandson, so she’s 100-percent “Team Will” here. Kate will feel like Sonny needs for forgive Will, especially since what happened that night was just a horrible accident.

Days of Our Lives Spoilers: Will Lani Tell Eli the Truth About Gabi’s Blackmail?

Will never meant to kill Adrienne Kiriakis (Judi Evans), so Kate will think Sonny should fight for love instead of going around kissing other men. However, Evan was actually the one who planted the smooch. Sonny wasn’t ready to take that step with Evan, so he let him down gently.

Nevertheless, it’s clear that forgiveness isn’t something Sonny can offer Will right now. They’re stuck in relationship limbo, so Kate will hope she can do something about that on Thursday. Days of Our Lives spoilers say Kate will show up at Statesville later and fill Will in on what she’s learned. She may push Will to allow Sonny’s visits again and try to get their marriage back on track.

Unfortunately, Will’s going to give up on their marriage instead! He’ll tell Sonny he wants a divorce next week, so DOOL spoilers say their relationship will become even harder to fix. Thankfully, there’s always hope on Days! It seems likely the innocent man Xander Kiriakis (Paul Telfer) and Victor Kiriakis (John Aniston) framed was actually Will – especially now that Justin Kiriakis (Wally Kurth) is Ben Weston’s (Robert Scott Wilson) attorney. That could put Justin in the prime position to uncover the truth.

Days Of Our Lives Spoilers: Nicole Walkers Heart Is Broken

Of course, we’ll just have to see how these storylines potentially collide down the road. For the time being, it seems Justin will speak with Ben and run into Will near the visiting area. Days of Our Lives spoilers say it’ll be difficult for Will and Justin to face each other, but they’ll just try to handle it as best as they can.

Over with Nicole Walker (Arianne Zucker), her heart will break when she learns Mackenzie “Mickey” Horton has cancer. Nicole will reach out to Eric and try to provide support, but he’s still in pain over the secret she kept from him. Sarah Horton (Linsey Godfrey) kept that secret as well, but Eric can’t blame her when they’re both so worried for Mickey.

Nicole could end up facing the bulk of Eric’s anger, but that’ll mostly be his fear talking. Let’s hope Nicole and Eric can find some form of peace before he makes plans with Sarah. Days spoilers say Eric and Sarah will decide to take a trip to Boston. It turns out a specialist’s there who could give Mickey her best shot at survival.

Another gripping episode’s on the way, so don’t miss what’s in store. We’ll keep you posted as other Days news and rumors emerge. Stick with DOOL and don’t forget to check back often for the latest Days of Our Lives spoilers, rumors, updates and news.