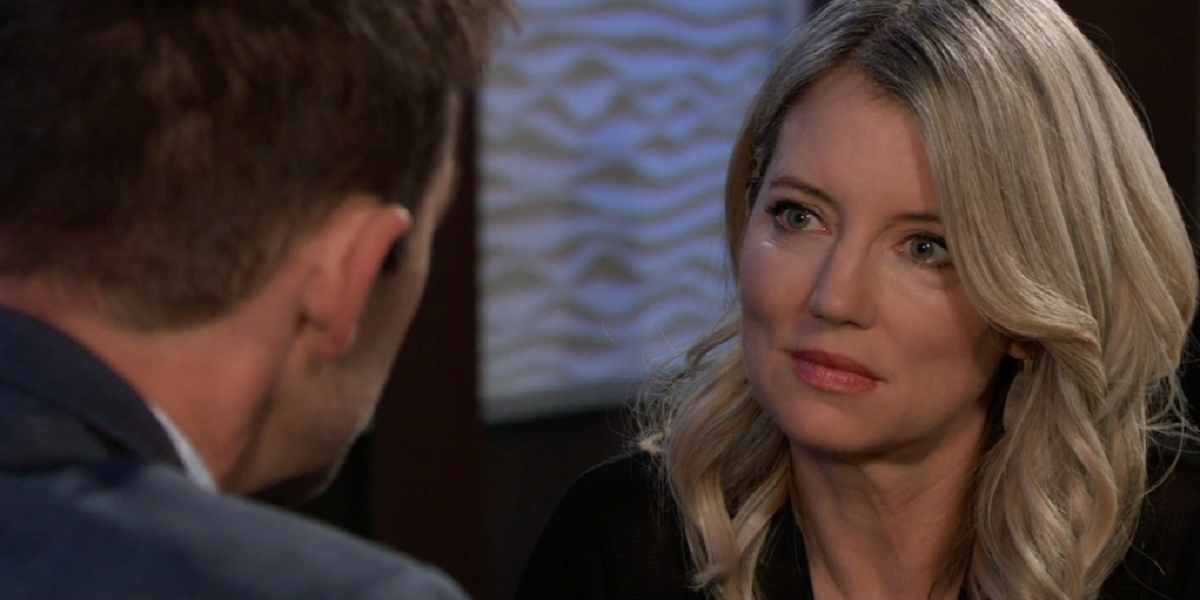 General Hospital (GH) spoilers tease that Nina Reeves (Cynthia Watros) will learn the truth about something – or – someone – in an upcoming episode of General Hospital!

Nina already suspects many things, but most of them are about her fiancé Valentin Cassadine (James Patrick Stuart) and his lies. Another thing she suspects is about a different Cassadine and his lies! That would be Nikolas Cassadine (Marcus Coloma) and his survival, after finding a man’s ring with a Cassadine crest underneath Ava Jerome’s (Maura West) bed at Shadybrook!

Nina was horrified at the terrible lies Ava told him that Nikolas told her after drugging her just to get information from her about the location of Helena Cassadine’s (Constance Towers) portrait. Ava was sitting, a crumpled up, drugged up the mess on the floor in front of her bed, crying, and saying “no more ghosts!”

After Nina found Nikolas’ ring, which she recognized the Cassadine crest from Valentin’s tattoo, and Ava told her Nikolas had a ring just like it (which she obviously removed from his finger grabbing his hand) then Nina realized he is alive and has been, and told Ava! In Monday, December 9 preview, we see Ava put together, dressed nicely and in her makeup shocked at another “ghost from her past” only this one never faked his death – Griffin Munro (Matt Cohen) pays her a visit so it looks like Nina got her out of Shadybrook! The two are now banded together to take down these two lying and scheming Cassadine men!

GH Spoilers– Nina Reeves Was A Woman On A Mission

Nina was aghast to find out that Valentin actually broke into Ava’s gallery trying to find that painting! She knows why, and she understands the importance of finding that codicil before Nikolas does but she was horrified to find out what happened that night in the back storage room of the gallery; she may have also been shocked that Valentin didn’t consider that Ava may have hidden security cameras all over the place, including in the storage rooms!

Ava herself may be the source of the information about Valentin breaking in, with his attorney Martin Gray (Michael E. Knight), nonetheless! Valentin even cracked the safe but didn’t find anything of interest, and then that masked man minus Tonto entered and got in a fight with Valentin and ran off! She is pretty well convinced that was Nikolas!

Nina may learn the truth about her suspicions of Nikolas’s survival when Charlotte Cassadine (Scarlett Fernandez) confides in her about the man who she saw on the pier the night Cassandra Pierce (Jessica Tuck) kidnapped her, and then showed up in their living room at Wyndemere, and told her he was her bodyguard, hired by Papa!

Then she saw a picture of him on her mother’s phone! Nina knows that Nikolas is Lulu Spencer’s (Emme Rylan) older brother as well as Valentin’s nephew, so now she knows for sure that Nikolas is alive, since Charlotte wasn’t drugged up like Ava was!