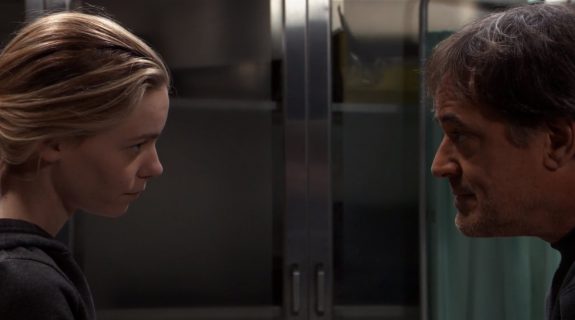 General Hospital (GH) spoilers for Thursday, December 12, tease that Brad Cooper (Parry Shen) will have a lot on his mind. At GH, Willow Tait (Katelyn MacMullen) will reach out to Brad and offer to help in any way she can. What Brad will need most in that moment is a sympathetic ear. He’ll tell Willow he wishes he could take back everything that landed them in the car that night.

GH Spoilers: Lucas Jones Is In A Medically Induced Coma

Lucas Jones (Ryan Carnes) is in a medically induced coma and has suffered swelling of the brain. Brad will struggle with the unknown and battle guilt for the deception that built up to the crash. Of course, Brad can’t divulge the truth about “Wiley Cooper-Jones” (Erik and Theo Olson) to Willow. He’ll just have to keep things vague and accept her support.

Willow may also end up supporting Michael Corinthos (Chad Duell) a little later. General Hospital spoilers say Michael will find himself in need of assistance, so Willow might pitch in with “Wiley” again. In the meantime, Michael will have some advice for Sonny Corinthos (Maurice Benard). He’ll encourage Sonny to think about if Grandpa would’ve wanted him to hang on.

Sonny’s desperate to keep hope for Mike Corbin (Max Gail) alive. He doesn’t want to accept that his father’s fading fast, but maybe that’s exactly what he needs to do. Like Carly Corinthos (Laura Wright) suggested, the best strategy is likely just enjoying what little time he has left with Mike. Sonny needs to squeeze in any lucid moments he can and try to make a few more memories.

At Turning Woods, Dev Cerci (Ashton Arbab) will accompany Josslyn Jacks (Eden McCoy) as she pays Mike a visit. General Hospital spoilers say a confused Mike will grab Dev’s arm and ask if they’re there to break him out. Josslyn may get a bit upset, but Dev will likely make up a story to appease Mike. Maybe the teens can turn this into a nice chat and bond in the process.

Over with Jason Morgan (Steve Burton), he’ll track down Ned Quartermaine (Wally Kurth) and ask if he’s heard anything about Sam McCall’s (Kelly Monaco) parole. At Pentonville later, Sam will speak with someone on the phone in the visiting area. She’ll look glum as she wonders what other choice she has. None of this sounds like good news for Sam, so she may remain stuck behind bars for now.

General Hospital Spoilers: Franco Is Devastated When He Hears About Drew https://t.co/cCZ860cu8G pic.twitter.com/4AhYPgOFdC

GH Spoilers: Nelle Benson Is Hoping Ryan Chamberlain Can Punch Her Ticket Out

As for Nelle Benson (Chloe Lanier), she’s hoping Ryan Chamberlain (Jon Lindstom) can punch her ticket out! Ryan just “attacked” Nelle as part of their plan to score her freedom. Nelle’s assured Ryan that there are plenty of Ava Jerome (Maura West) pics in it for him if he cooperates. She’s willing to be Ryan’s link to Ava and the rest of Port Charles, so Ryan has done her a bloody favor.

On Thursday, Ryan will still be holding the scalpel as Nelle writhes on the floor dramatically. General Hospital spoilers say Ryan will tell Harrison Chase (Josh Swickard) this isn’t what it looks like. However, both Ryan and Nelle are counting on Chase to fall for their scheme. He’ll conduct an investigation and try to figure out the real story, so it’ll be interesting to see how it all plays out.