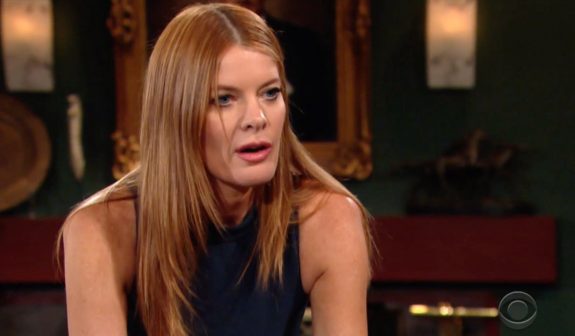 The Young and the Restless spoilers for Friday, December 13, tease that Phyllis Summers (Michelle Stafford) and Nick Newman (Joshua Morrow) will chat at Crimson Lights, after Phyllis rants about the jukebox. They’ll discuss her recent firing, and Phyllis will get in a dig about Chelsea Lawson (Melissa Claire Egan) as well, noting that if Nick had dumped her, then he could have won the city council race.

Meanwhile, Chelsea will return to Adam Newman’s (Mark Grossman) penthouse, and she and Adam will talk about Connor Newman’s (Judah Mackey) lies about Sharon. Adam will say that they need to address Connor’s lies, but Chelsea will point out that they’ve been lying, too. She’ll want to prepare Connor for the reality that this won’t last forever. Adam will realize that Nick is behind this, and the two will argue.

The Young and the Restless Spoilers: Chelsea Feeling Pressured While Nick Is Unsettled

Chelsea will be about to leave angrily when Connor appears. Connor will ask his mom not to go, and he’ll say that this is all Sharon’s fault. Adam will say that’s not true, and Connor will go on to say that the “monster” wants Chelsea to leave, that it’s his plan, and when they’re not all together everything goes wrong. Connor will then cry until Chelsea promises she’s coming back.

Next on Y&R, Billy Abbott (Jason Thompson) will work on building a dollhouse by himself, thinking to himself that that male doll probably never broke his wife’s heart. Victoria Newman (Amelia Heinle) will join him and they’ll talk about how they’ve been missing each other. Bill will update Victoria on what he’s been doing lately, and Victoria will think that he’s been avoiding her.

Billy will think to himself that he’s holding back from Victoria as she takes a work call, then the two will make love before Victoria goes back to work. Billy will then pace and won’t know what to do with himself. He’ll end up sitting down and writing “Hey Beautiful” in a card.

Next on Y&R, Chance Chancellor (Donny Boaz) be at the Grand Phoenix texting with Abby Newman (Melissa Ordway), who’s at Society. Phyllis will show up and blast him about her firing. They’ll argue, and ultimately Chance will instruct her to take it somewhere else. She’ll ask if she should take it to Vegas, and Chance will try to call her bluff, but Phyllis will mention a duffle bag and a gun.

Chance will then say he was working undercover, but Phyllis will say that he wasn’t carrying it…the little sleazy guy was. Chance will suggest that she get a job, but Phyllis won’t be deterred. She’ll say that something big went down and that he and Adam were right in the middle of it, and she’ll find out what it was. He’ll tell her that her life is so empty that she has to dig up dirt on other people.

Meanwhile, at Society, Abby will see Victoria and they’ll talk about how Victoria reconnected with Billy. Victoria will notice that Abby seems awfully happy, but Abby won’t want to jinx it. Once back at Newman Enterprises, Victoria will text Billy saying that she loves him.

Next on Y&R, at the little bar outside Genoa City. Amanda Sinclair (Mishael Morgan) will ask Billy to have a seat with her. Billy will say that everything in his life is perfect except for him, and Amanda will make a remark about leaving baggage behind. Billy will mention Hilary Hamilton (Mishael Morgan), and Billy will muse that he liked Hilary but doesn’t really know who Amanda is. Amanda will say she’s a person who is learning to trust people. At Nick’s place, Chelsea will arrive upset about Connor.

Nick will start in on her, noting that Christian Newman (Alex Wilson) wondered if Chelsea and Connor were ever coming home, and Nick didn’t know the answer. Chelsea will say that she has to put Connor first. Nick will say that he understands, but that he doesn’t know if he can keep doing this. Back at the Grand Phoenix, Abby will arrive and talk with Chance. They’ll discuss his encounter with Phyllis, and she’ll ask if he will take the job as head of security at the hotel. He’ll decline, but he will say that he’s decided to stay in Genoa City. They’ll toast to the future, and he’ll ask
her out on a date.

Finally, on Friday’s new episode of Y&R, Connor will wake up, with Adam assuring him that his mother is coming back. Adam will then ignore an incoming call from Victor. Be sure to tune in on Friday to catch up on everything happening on Y&R right now. Check Hollywood Hiccups often for updates, news, rumors, and spoilers!