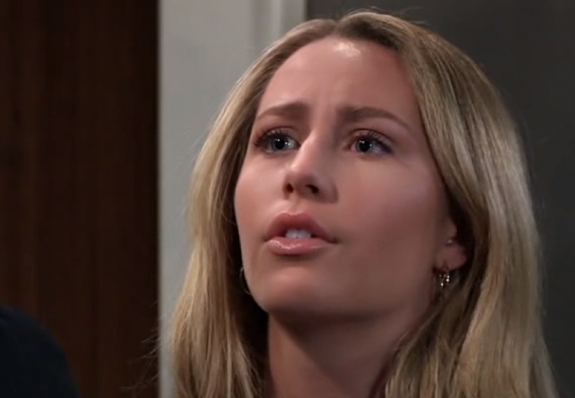 Sam tells Jason she wanted to scream at the parole board. Jason wants Ned Quartermaine (Wally Kurth) to check on Sam’s parole hearing. Ned refuses to make a call. Alexis Davis (Nancy Lee Grahn) visits Sam. Alexis wants Sam to be patient, Sam has no other choice. Jason wants to know if there is any way Ned can help at all. Ned suggests Jason let things happen unless he wants to call in a favor of his own. Sam tells Alexis this is her fault.

General Hospital’s Ned offers to help Michael with ELQ. Michael thinks Ned wants to take over the business. Ned was offering to be Michael’s backup. Michael tells Ned he was going to ask him to help. Ned wants to take care of Oscar Nero’s (Garren Stitt) shares before anything else. Ned says the lawyers think they are close to settling things. Ned wants to buy the shares if they were Oscar’s. Michael says Wiley could be a legal heir as well.

General Hospital’s Sonny Corinthos (Maurice Benard) is trying to get Mike Corbin (Max Gail) into a clinical trial. Michael Corinthos (Chad Duell) believes Sonny is making a mistake. Sonny wants to give Mike a chance. Michael wonders if Mike would want Sonny to keep holding on like this. Sonny argues that Mike isn’t dead yet. Michael says he isn’t grandpa anymore. Michael talks about Mike not knowing the house. Michael questions what it will be like in a foreign country.

General Hospital’s Monica Quartermaine (Leslie Charleston) has checked on Lucas Jones (Ryan Carnes). Monica updates Bobbie Spencer (Jackie Zeman) before talking to the rest of the family. Lucas means a lot to the hospital and everyone who works there. Monica informs everyone they are going to try and ween Lucas off the ventilator. Lucas is off the ventilator and breathing on his own. Monica explains the next twenty-four hours are critical. The longer Lucas is in the coma the less likely he is to wake up. Carly talks about how unfair things are.

General Hospital’s Brook Lynn Ashton (Amanda Setton) tells Carly Corinthos (Laura Wright) that Julian Jerome (William DeVry) thought she was a hooker. Willow Tait (Katelyn MacMullen) tries to comfort Brad Cooper (Parry Shen) as Julian listens to them. Bobbie tells Brook that Lucas will be thrilled to see her when he wakes up. Willow asks Julian if he needs anything. Julian tells Willow how much Lucas would appreciate her being there. Willow asks Julian to speak to Brad. Julian promises to speak to Brad. Willow brings Brad something to eat. Brad tells Willow this is none of her business. Brad tells Willow to stop being so nice, she doesn’t know the truth.

General Hospital’s Mike believes Dev Corbin (Ashton Arbab) is there to break him out. Mike wants to go to the track to make some money. Jocelyn Jacks (Eden McCoy) helps talk Mike into playing checkers with him. Mike questions who Jocelyn is there to see. Jocelyn is there to see Mike. Mike wants to play craps with Dev. Sonny arrives and Mike cusses him. Jocelyn tries to calm Mike down. Mike believes Sonny is Joe Scully (Robert Miano) and calls him trash. Mike thinks that Dev is his son.

Jocelyn explains that this guy’s name is Sonny too. Dev says he invited him. Mike asks Sonny if he has kids, Sonny says he does. Mike invites Sonny to join them, they are playing for pennies. Jocelyn asks if Sonny is ok. Mike cleans everyone out. Mike is tired and has to go to bed. Mike tells Sonny is was nice to meet him. Mike makes Dev promise to get Jocelyn home. Sonny wants Dev to wait outside for him. Sonny speaks to Mike and offers to walk him to his room if he wants. Mike tells Sonny he’s ok. Mike tells Sonny to come back anytime.

General Hospital’s Nelle screams, Harrison Chase (Josh Swickard) and a guard rush into the room to find Ryan Chamberlain (Jon Lindstrom) standing over her with a knife. Nelle has been stabbed above her kidney and needs transporting to the hospital. Ryan asks why Chase isn’t questioning him. Nelle is brought into the hospital, Carly sees her. Carly speaks to Chase about Nelle. Chase tells Carly what happened and that Nelle will be taken care of soon. Nelle is to be patched up and sent back to prison.

Nelle tries to appeal to Chase. Nelle knows Chase wouldn’t be there unless he cared. Chase needs a statement from Nelle. Nelle say she came to restock the towels and Ryan was there by himself. Nelle claims Ryan tried to get her to help him escape. Nelle claims to have tried to alert the guards. Nelle claims Chase saved her life. Chase checks on Willow and tells her and Brad he had to take Nelle’s statement. Nelle gets the guard’s phone and calls Martin Gray (Michael E. Knight).