The Young and the Restless Spoilers: Monday, December 16 – Amanda’s An Orphan – Kyle Stews About Theo & Lola – Billy’s Unsettled About His Life 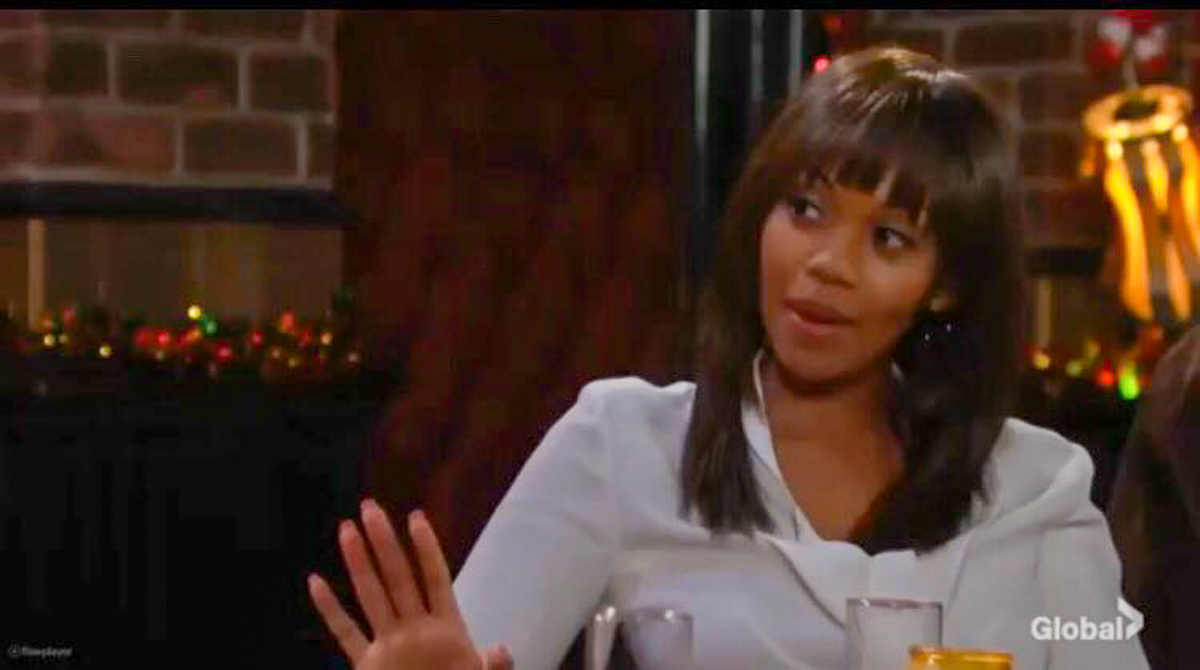 The Young and the Restless spoilers for Monday, December 16, tease that Billy Abbott (Jason Thompson) and Amanda Sinclair (Mishael Morgan) will talk about their lives at the bar outside of Genoa City. Amanda will let it be known that she was an orphan and grew up in foster homes. Turns out, she doesn’t let people get too close and while she has things figured out professionally, her personal life is a different story.

Billy will then get a call from Victoria Neman (Amelia Heinle), who will want to meet him, but he’ll refuse that and say that he’ll reconnect with her at home later, where he’s left something for her. Amanda will take off, and Billy will get invited to play poker, which he’ll decline and be happy with himself over.

Later, at home, Victoria will open a card from Billy, in which he’s asked her to treat herself until he returns. Once he arrives, she’ll thank him for the card, wine, and chocolate. She’ll say that he’s the perfect husband for her, and he’ll look unsettled as they hug. Victoria will muse a bit about how he’s transformed and become the real him.

Next on Y&R, at Jabot, Summer Newman (Hunter King) and Kyle Abbott (Michael Mealor will be at work on a marketing plan. They’ll kid around for a little bit, then get back to work – she has nothing exciting to do with her evenings these days. She’ll then take Kyle’s phone to video call Lola Abbott (Sasha Calle).

Young & The Restless Spoilers – Kyle Abbott Gets An Unwelcome Surprise

Meanwhile, Lola will talk with Theo Vanderway (Tyler Johnson) at Society about his work on emojis for Jabot, or “Jabojis.” They’ll chat for a while, and Lola will like the “Jabojis.” After a while, Lola will get a call from Summer on Kyle’s phone, who will suggest that she try to get her tired husband to come home. But Lola will say she can’t leave Society and will show the busy restaurant on the video call. Kyle will spot Theo oh the feed.

After disconnecting, Theo will eat some of Lola’s cooking and he’ll agree to be her taste-tester. He’ll even come up with a term for her “experimenu” and say that she should trademark it. Lola will say that she’ll make his favorite dishes for him, and that it will be their little secret.

Next on Y&R, Nate Hastings (Sean Dominic) and Abby Newman (Melissa Ordway) will chat. Nate will remark that they’re still friends, and Abby will counter that they’re friendly but that she wants to be real friends. They’ll discuss Victor Newman’s (Eric Braeden) death ruse and decide to make amends.

Later, Amanda will be sitting at the bar, and her phone will ring, but no one will be on the other end when she answers. This will unnerve her, and she’ll look around, clearly unsettled.

Back at Jabot, Summer will wonder if everything is ok with Kyle, who will just want to keep working, clearly upset at seeing Theo at Society with Lola. Summer will apologize for making the video call. Later, Kyle will tell Summer that she’s invaluable and means more than she knows to the company. She’ll wonder if he wants to go home, but he’ll say he’s exactly where he needs to be.

Next on Y&R, at Devon Hamilton’s (Bryton James) penthouse, he’ll apologize to Elena Dawson (Brytni Sarpy) for his behavior lately, saying that she deserves to be with someone better. But then he’ll say that things are going to change starting now. They’ll discuss Amanda a bit, and Devon will say that he understands why she talked with her. Elena will say that she wants all of him, even the parts he thinks he needs to hide.

After Elena leaves for work, Devon will peruse the dossier on Amanda and do some research on her, learning that she had a fiancé named Ripley Turner, and that they each filed restraining orders on the other. Meanwhile Elena will talk with Nate at Crimson Lights, who will reassure her that he knows what he’s doing, and that everything will work out.

Finally, on Monday’s new episode of Y&R, Devon will then head to the Grand Phoenix, where he’ll encounter Abby. He’ll ask some questions to find out if Amanda is still staying at the hotel, and Abby will surmise that he hopes that she’s gone. Devon will look at his phone, about to do a search for Ripley Turner.